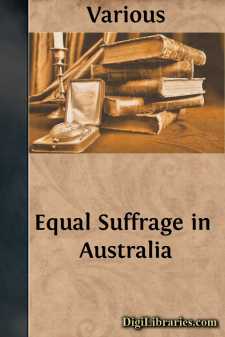 Lady Holder, the wife of Sir Frederick W. Holder, K. C. M. G., Speaker of the House of Representatives of Federated Australia, contributed the following article to the N. Y. Independent, of June 9, 1904. Lady Holder has taken a leading part in philanthropic work in South Australia. She says:

"The women of South Australia were placed in a position of political equality with men several years ago. Accordingly, everybody has become accustomed to the arrangement, and it seems perfectly natural. It has not produced any marked effect on female character, or made any particular difference to domestic life. Women are more interested in public affairs than they used to be, and politicians deal more earnestly with home and social questions, but no neglect of private duties on that account can be laid to the women's charge. We are well supplied with high-class newspapers, the same sources of information are open to women as to men, and the questions that arise are not by any means beyond the scope of their intelligence. At election meetings there is commonly a good sprinkling of women voters in the audiences. It is said that their presence tends to prevent disorderliness, and I have never heard of a lady at any meeting being rudely treated.

"Voting, with us, is one of the simplest things in the world. When an elector's mind is made up, there is less difficulty in expressing it through the ballot-box than in matching a ribbon, and the one act is not considered more unfeminine than the other. Our freedom has not developed a class of political women, we have no "shrieking sisterhood," but we know and use our power. We can do a great deal toward securing members of good character in the Parliament and influencing their votes, and are generally content with the results of our enfranchisement.

"I have described the conditions in my own State thus fully because, though it is one of the smaller States in the Australian Commonwealth, in this matter it is further advanced than most of the others. When federation came, adult suffrage was the law only in South Australia and Western Australia; it has since been adopted in New South Wales and Tasmania, but it has not yet been granted, so far as the State Legislatures are concerned, in the other two. The Federal Parliament, however, had to make its own electoral laws, and to establish uniformity was obliged to adopt the broadest existing basis, because the constitution forbade the outrage and anomaly of disfranchising persons by whom some of its members had been elected. Accordingly, the women of New South Wales, Victoria, Queensland, and Tasmania were somewhat suddenly placed in the same position of political equality, so far as the Commonwealth is concerned, as their South Australian and West Australian sisters. They were legally qualified to act in the Federal elections of last December, and as they had not been allowed a similar privilege at elections for their legislatures, of course the event produced considerable sensation and wore an air of strangeness and novelty. The newspapers gave special attention to the new voters, and teemed with exhortations as to the way they should go, and it was amusing to observe how some candidates who had fought against woman's suffrage with all their might tried to show their supreme regard and esteem for the voters whose rights they had previously refused....