English Past and Present 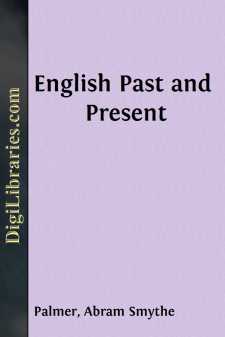 Add to My Favorites
Published: 8 years ago
Downloads: 192
Rating: (0 Votes)

“A very slight acquaintance with the history of our own language will teach us that the speech of Chaucer’s age is not the speech of Skelton’s, that there is a great difference between the language under Elizabeth and that under Charles the First, between that under Charles the First and Charles the Second, between that under Charles the Second and Queen Anne; that considerable changes had taken place between the beginning and the middle of the last century, and that Johnson and Fielding did not write altogether as we do now. For in the course of a nation’s progress new ideas are evermore mounting above the horizon, while others are lost sight of and sink below it: others again change their form and aspect: others which seemed united, split into parts. And as it is with ideas, so it is with their symbols, words. New ones are perpetually coined to meet the demand of an advanced understanding, of new feelings that have sprung out of the decay of old ones, of ideas that have shot forth from the summit of the tree of our knowledge; old words meanwhile fall into disuse and become obsolete; others have their meaning narrowed and defined; synonyms diverge from each other and their property is parted between them; nay, whole classes of words will now and then be thrown overboard, as new feelings or perceptions of analogy gain ground. A history of the language in which all these vicissitudes should be pointed out, in which the introduction of every new word should be noted, so far as it is possible—and much may be done in this way by laborious and diligent and judicious research—in which such words as have become obsolete should be followed down to their final extinction, in which all the most remarkable words should be traced through their successive phases of meaning, and in which moreover the causes and occasions of these changes should be explained, such a work would not only abound in entertainment, but would throw more light on the development of the human mind than all the brainspun systems of metaphysics that ever were written”.

These words, which thus far are not my own, but the words of a greatly honoured friend and teacher, who, though we behold him now no more, still teaches, and will teach, by the wisdom of his writings, and the nobleness of his life (they are words of Archdeacon Hare), I have put in the forefront of my lectures; seeing that they anticipate in the way of masterly sketch all which I shall attempt to accomplish, and indeed draw out the lines of much more, to which I shall not venture so much as to put my hand. They are the more welcome to me, because they encourage me to believe that if, in choosing the English language, its past and its present, as the subject of that brief course of lectures which I am to deliver in this place, I have chosen a subject which in many ways transcends my powers, and lies beyond the range of my knowledge, it is yet one in itself of deepest interest, and of fully recognized value. Nor can I refrain from hoping that even with my imperfect handling, it is an argument which will find an answer and an echo in the hearts of all who hear me; which would have found this at any time; which will do so especially at the present....