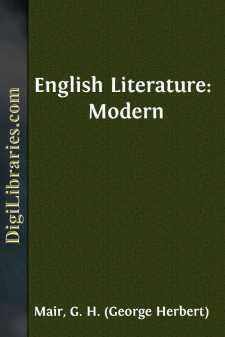 CHAPTER I THE RENAISSANCE (1)

There are times in every man's experience when some sudden widening of the boundaries of his knowledge, some vision of hitherto untried and unrealized possibilities, has come and seemed to bring with it new life and the inspiration of fresh and splendid endeavour. It may be some great book read for the first time not as a book, but as a revelation; it may be the first realization of the extent and moment of what physical science has to teach us; it may be, like Carlyle's "Everlasting Yea," an ethical illumination, or spiritual like Augustine's or John Wesley's. But whatever it is, it brings with it new eyes, new powers of comprehension, and seems to reveal a treasury of latent and unsuspected talents in the mind and heart. The history of mankind has its parallels to these moments of illumination in the life of the individual. There are times when the boundaries of human experience, always narrow, and fluctuating but little between age and age, suddenly widen themselves, and the spirit of man leaps forward to possess and explore its new domain. These are the great ages of the world. They could be counted, perhaps, on one hand. The age of Pericles in Athens; the less defined age, when Europe passed, spiritually and artistically, from what we call the Dark, to what we call the Middle Ages; the Renaissance; the period of the French Revolution. Two of them, so far as English literature is concerned, fall within the compass of this book, and it is with one of them—the Renaissance—that it begins.

It is as difficult to find a comprehensive formula for what the Renaissance meant as to tie it down to a date. The year 1453 A.D., when the Eastern Empire—the last relic of the continuous spirit of Rome—fell before the Turks, used to be given as the date, and perhaps the word "Renaissance" itself—"a new birth"—is as much as can be accomplished shortly by way of definition. Michelet's resonant "discovery by mankind of himself and of the world" rather expresses what a man of the Renaissance himself must have thought it, than what we in this age can declare it to be. But both endeavours to date and to define are alike impossible. One cannot fix a term to day or night, and the theory of the Renaissance as a kind of tropical dawn—a sudden passage to light from darkness—is not to be considered. The Renaissance was, and was the result of, a numerous and various series of events which followed and accompanied one another from the fourteenth to the beginning of the sixteenth centuries. First and most immediate in its influence on art and literature and thought, was the rediscovery of the ancient literatures. In the Middle Ages knowledge of Greek and Latin literatures had withdrawn itself into monasteries, and there narrowed till of secular Latin writing scarcely any knowledge remained save of Vergil (because of his supposed Messianic prophecy) and Statius, and of Greek, except Aristotle, none at all. What had been lost in the Western Empire, however, subsisted in the East, and the continual advance of the Turk on the territories of the Emperors of Constantinople drove westward to the shelter of Italy and the Church, and to the patronage of the Medicis, a crowd of scholars who brought with them their manuscripts of Homer and the dramatists, of Thucydides and Herodotus, and most momentous perhaps for the age to come, of Plato and Demosthenes and of the New Testament in its original Greek....