English Literature, Considered as an Interpreter of English History Designed as a Manual of Instruction 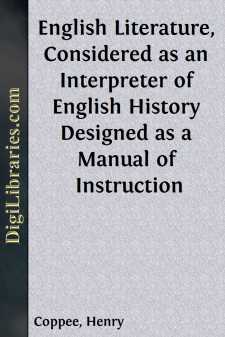 Chapter I. The Historical Scope of the Subject.

There are two words in the English language which are now used to express the two great divisions of mental production—Science and Literature; and yet, from their etymology, they have so much in common, that it has been necessary to attach to each a technical meaning, in order that we may employ them without confusion.

Science, from the participle sciens, of scio, scire, to know, would seem to comprise all that can be known—what the Latins called the omne scibile, or all-knowable.

Literature is from litera, a letter, and probably at one remove from lino, litum, to anoint or besmear, because in the earlier times a tablet was smeared with wax, and letters were traced upon it with a graver. Literature, in its first meaning, would, therefore, comprise all that can be conveyed by the use of letters.

But language is impatient of retaining two words which convey the same meaning; and although science had at first to do with the fact of knowing and the conditions of knowledge in the abstract, while literature meant the written record of such knowledge, a far more distinct sphere has been given to each in later times, and special functions assigned them.

In general terms, Science now means any branch of knowledge in which men search for principles reaching back to the ultimate, or for facts which establish these principles, or are classified by them in a logical order. Thus we speak of the mathematical, physical, metaphysical, and moral sciences.

Literature, which is of later development as at present used, comprises those subjects which have a relation to human life and human nature through the power of the imagination and the fancy. Technically, literature includes history, poetry, oratory, the drama, and works of fiction, and critical productions upon any of these as themes.

Such, at least, will be a sufficiently exact division for our purpose, although the student will find them overlapping each other's domain occasionally, interchanging functions, and reciprocally serving for each other's advantage. Thus it is no confusion of terms to speak of the poetry of science and of the science of poetry; and thus the great functions of the human mind, although scientifically distinct, co-operate in harmonious and reciprocal relations in their diverse and manifold productions.

English Literature.—English Literature may then be considered as comprising the progressive productions of the English mind in the paths of imagination and taste, and is to be studied in the works of the poets, historians, dramatists, essayists, and romancers—a long line of brilliant names from the origin of the language to the present day.

To the general reader all that is profitable in this study dates from the appearance of Chaucer, who has been justly styled the Father of English Poetry; and Chaucer even requires a glossary, as a considerable portion of his vocabulary has become obsolete and much of it has been modified; but for the student of English literature, who wishes to understand its philosophy and its historic relations, it becomes necessary to ascend to a more remote period, in order to find the origin of the language in which Chaucer wrote, and the effect produced upon him by any antecedent literary works, in the root-languages from which the English has sprung....