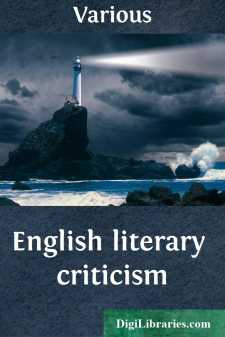 In England, as elsewhere, criticism was a late birth of the literary spirit. English poets had sung and literary prose been written for centuries before it struck men to ask themselves, What is the secret of the power that these things have on our mind, and by what principles are they to be judged? And it could hardly have been otherwise. Criticism is a self-conscious art, and could not have arisen in an age of intellectual childhood. It is a derivative art, and could scarcely have come into being without a large body of literature to suggest canons of judgment, and to furnish instances of their application.

The age of Chaucer might have been expected to bring with it a new departure. It was an age of self-scrutiny and of bold experiment. A new world of thought and imagination had dawned upon it; and a new literature, that of Italy, was spread before it. Yet who shall say that the facts answer to these expectations? In the writings of Chaucer himself a keen eye, it is true, may discern the faint beginnings of the critical spirit. No poet has written with more nicely calculated art; none has passed a cooler judgment upon the popular taste of his generation. We know that Chaucer despised the "false gallop" of chivalrous verse; we know that he had small respect for the marvels of Arthurian romance. And his admiration is at least as frank as his contempt. What poet has felt and avowed a deeper reverence for the great Latins? What poet has been so alert to recognize the master-spirits of his own time and his father's? De Meung and Granson among the French—Dante, Petrarch and Boccaccio of the Italians—each comes in for his share of praise from Chaucer, or of the princely borrowings which are still more eloquent than praise.

Yet, for all this, Chaucer is far indeed from founding the art of criticism. His business was to create, and not to criticise. And, had he set himself to do so, there is no warrant that his success would have been great. In many ways he was still in bondage to the mediaval, and wholly uncritical, tradition. One classic, we may almost say, was as good to him as another. He seems to have placed Ovid on a line with Virgil; and the company in his House of Fame is undeniably mixed. His judgments have the healthy instinct of the consummate artist. They do not show, as those of his master, Petrarch, unquestionably do, the discrimination and the tact of the born critic.

For this, or for any approach to it, English literature had to wait for yet two centuries more. In the strict sense, criticism did not begin till the age of Elizabeth; and, like much else in our literature, it was largely due to the passion for classical study, so strongly marked in the poets and dramatists of Shakespeare's youth, and inaugurated by Surrey and others in the previous generation. These conditions are in themselves significant. They serve to explain much both of the strength and the weakness of criticism, as it has grown up on English soil. From the Elizabethans to Milton, from Milton to Johnson, English criticism was dominated by constant reference to classical models....