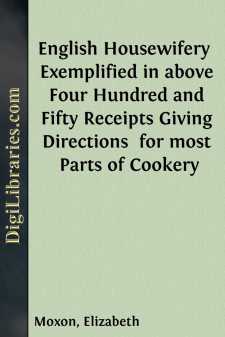 Take a neck of beef, or any other piece; cut off some slices, and fry them with butter 'till they are very brown; wash your pan out every time with a little of the gravy; you may broil a few slices of the beef upon a grid-iron: put all together into a pot, with a large onion, a little salt, and a little whole pepper; let it stew 'till the meat is tender, and skim off the fat in the boiling; them strain it into your dish, and boil four ounces of vermicelly in a little of the gravy 'till it is soft: Add a little stew'd spinage; then put all together into a dish, with toasts of bread; laying a little vermicelly upon the toast. Garnish your dish with creed rice and boil'd spinage, or carrots slic'd thin.

Take a houghil of beef, break it small and put it into a stew-pan, with part of a neck of mutton, a little whole pepper, an onion, and a little salt; cover it with water, and let it stand in the oven all night, then strain it and take off the fat; pare six or eight middle-siz'd cucumbers, and slice them not very thin, stew them in a little butter and a little whole pepper; take them out of the butter and put 'em in the gravy. Garnish your dish with raspings of bread, and serve it up with toasts of bread or French roll.

Cut the hare into small pieces, wash it and put it into a stew-pan, with a knuckle of veal; put in it a gallon of water, a little salt, and a handful of sweet herbs; let it stew 'till the gravy be good; fry a little of the hare to brown the soop; you may put in it some crusts of write bread among the meat to thicken the soop; put it into a dish, with a little stew'd spinage, crisp'd bread, and a few forc'd-meat balls. Garnish your dish with boil'd spinage and turnips, cut it in thin square slices.

Take a neck of mutton, and a knuckle of veal, make of them a little good gravy; then take half a peck of the greenest young peas, boil and beat them to a pulp in a marble mortar; then put to them a little of the gravy; strain them through a hair sieve to take out all the pulp; put all together, with a little salt and whole pepper; then boil it a little, and if you think the soop not green enough, boil a handful of spinage very tender, rub it through a hair-sieve, and put into the soop with one spoonful of wheat-flour, to keep it from running: You must not let it boil after the spinage is put in, it will discolour it; then cut white bread in little diamonds, fry them in butter while crisp, and put it into a dish, with a few whole peas. Garnish your dish with creed rice, and red beet-root.

You may make asparagus-soop the same way, only add tops of asparagus, instead of whole pease.

Take four or five large onions, pill and boil them in milk and water whilst tender, (shifting them two or three times in the boiling) beat 'em in a marble mortar to a pulp, and rub them thro' a hair-sieve, and put them into a little sweet gravy; then fry a few slices of veal, and two or three slices of lean bacon; beat them in a marble mortar as small as forc'd-meat; put it into your stew-pan with the gravy and onions, and boil them; mix a spoonful of wheat-flour with a little water, and put it into the soop to keep it from running; strain all through a cullender, season it to your taste; then put into the dish a little spinage stew'd in butter, and a little crisp bread; so serve it up....