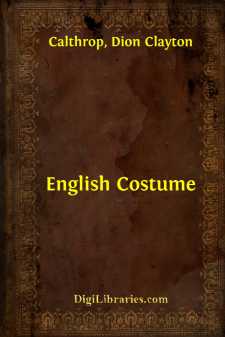 The world, if we choose to see it so, is a complicated picture of people dressing and undressing. The history of the world is composed of the chat of a little band of tailors seated cross-legged on their boards; they gossip across the centuries, feeling, as they should, very busy and important. Someone made the coat of many colours for Joseph, another cut into material for Elijah’s mantle.

Baldwin, from his stall on the site of the great battle, has only to stretch his neck round to nod to the tailor who made the toga for Julius Cæsar; has only to lean forward to smile to Pasquino, the wittiest of tailors.

John Pepys, the tailor, gossips with his neighbour who cut that jackanapes coat with silver buttons so proudly worn by Samuel Pepys, his son. Mr. Schweitzer, who cut Beau Brummell’s coat, talks to Mr. Meyer, who shaped his pantaloons. Our world is full of the sound of scissors, the clipping of which, with the gossiping tongues, drown the grander voices of history.

As you will see, I have devoted myself entirely to civil costume—that is, the clothes a man or a woman would wear from choice, and not by reason of an appointment to some ecclesiastical post, or to a military calling, or to the Bar, or the Bench. Such clothes are but symbols of their trades and professions, and have been dealt with by persons who specialize in those professions.

I have taken the date of the Conquest as my starting-point, and from that date—a very simple period of clothes—I have followed the changes of the garments reign by reign, fold by fold, button by button, until we arrive quite smoothly at Beau Brummell, the inventor of modern clothes, the prophet of cleanliness.

I have taken considerable pains to trace the influence of one garment upon its successor, to reduce the wardrobe for each reign down to its simplest cuts and folds, so that the reader may follow quite easily the passage of the coat from its birth to its ripe age, and by this means may not only know the clothes of one time, but the reasons for those garments. To the best of my knowledge, such a thing has never been done before; most works on dress try to include the world from Adam to Charles Dickens, lump a century into a page, and dismiss the ancient Egyptians in a couple of colour plates.

A man, in a sense, belongs to his clothes; they are so much a part of him that, to take him seriously, one must know how he walked about, in what habit, with what air.

I am compelled to speak strongly of my own work because I believe in it, and I feel that the series of paintings in these volumes are really a valuable addition to English history. To be modest is often to be excessively vain, and, having made an exhaustive study of my subject from my own point of view, I do not feel called upon to hide my knowledge under a bushel....