English as She is Wrote Showing Curious Ways in which the English Language may be made to Convey Ideas or obscure them. 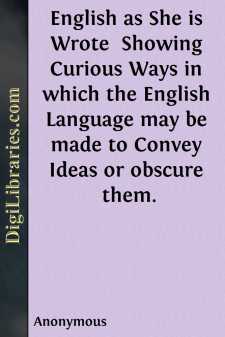 In the account of an inaugural ceremony it was asserted that "the procession was very fine, and nearly two miles long, as was also the report of Dr. Perry, the chaplain."

A Western paper says: "A child was run over by a wagon three years old, and cross-eyed, with pantalets on, which never spoke afterward."

Here is some descriptive evidence of personal peculiarities:

"A fellow was arrested with short hair." "I saw a man digging a well with a Roman nose." "A house was built by a mason of brown stone." "Wanted—A room by two gentlemen thirty feet long and twenty feet wide." "A man from Africa called to pay his compliments tall and dark-complexioned." "I perceived that it had been scoured with half an eye."

A sea-captain once asserted that his "vessel was beautifully painted with a tall mast."

In an account of travels we are assured that "a pearl was found by a sailor in a shell."

A bill presented to a farmer ran thus: "To hanging two barn doors and myself, 4s. 6d."

A store-keeper assures his customers that "the longest time and easiest terms are given by any other house in the city."

Here is a curious evidence of philanthropy: "A wealthy gentleman will adopt a little boy with a small family."

A parochial report states that "the town farm-house and almshouse have been carried on the past year to our reasonable satisfaction, especially the almshouse, at which there have been an unusual amount of sickness and three deaths."

A Kansas paper thus ends a marriage notice: "The couple left for the East on the night train where they will reside."

In the account of a shipwreck we find the following: "The captain swam ashore. So did the chambermaid; she was insured for a large sum and loaded with pig-iron."

A notice at the entrance to a bridge asserts that "any person driving over this bridge in a faster pace than a walk shall, if a white person be fined five dollars, and if a negro receive twenty-five lashes, half the penalty to be bestowed on the informer."

The following notice appeared on the west end of a country meeting-house: "Anybody sticking bills against this church will be prosecuted according to law or any other nuisance."

A gushing but ungrammatical editor says: "We have received a basket of fine grapes from our friend ——, for which he will please accept our compliments, some of which are nearly one inch in diameter."

On the panel under the letter-receiver of the General Post-Office, Dublin, these words are printed: "Post here letters too late for the next mail."

An Ohio farmer is said to have the following warning posted conspicuously on his premises: "If any man's or woman's cows or oxen gits in this here oats his or her tail will be cut off, as the case may be."

A lady desired to communicate by electricity to her husband in the city the size of an illuminated text which she had promised for the Sunday-school room. When the order reached him it read, "Unto us a child is born, nine feet long by two feet wide."

A farmer who wished to enter some of his live-stock at an agricultural exhibition, in the innocence of his heart, but with more truth in his words than he dreamed of, wrote to the committee, saying, "Enter me for one jackass."

An Irishman complained to his physician that "he stuffed him so much with drugs that he was ill a long time after he got well."

A correspondent of a New York paper described Mr....