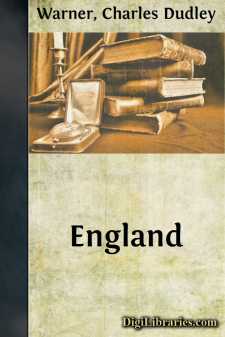 England has played a part in modern history altogether out of proportion to its size. The whole of Great Britain, including Ireland, has only eleven thousand more square miles than Italy; and England and Wales alone are not half so large as Italy. England alone is about the size of North Carolina. It is, as Franklin, in 1763, wrote to Mary Stevenson in London, "that petty island which, compared to America, is but a stepping-stone in a brook, scarce enough of it above water to keep one's shoes dry."

A considerable portion of it is under water, or water-soaked a good part of the year, and I suppose it has more acres for breeding frogs than any other northern land, except Holland. Old Harrison says that the North Britons when overcome by hunger used to creep into the marshes till the water was up to their chins and there remain a long time, "onlie to qualifie the heats of their stomachs by violence, which otherwise would have wrought and beene readie to oppresse them for hunger and want of sustinance." It lies so far north—the latitude of Labrador—that the winters are long and the climate inhospitable. It would be severely cold if the Gulf Stream did not make it always damp and curtain it with clouds. In some parts the soil is heavy with water, in others it is only a thin stratum above the chalk; in fact, agricultural production could scarcely be said to exist there until fortunes made in India and in other foreign adventure enabled the owners of the land to pile it knee-deep with fertilizers from Peru and elsewhere. Thanks to accumulated wealth and the Gulf Stream, its turf is green and soft; figs, which will not mature with us north of the capes of Virginia, ripen in sheltered nooks in Oxford, and the large and unfrequent strawberry sometimes appears upon the dinner-table in such profusion that the guests can indulge in one apiece.

Yet this small, originally infertile island has been for two centuries, and is today, the most vital influence on the globe. Cast your eye over the world upon her possessions, insular and continental, into any one of which, almost, England might be dropped, with slight disturbance, as you would transfer a hanging garden. For any parallel to her power and possessions you must go back to ancient Rome. Egypt under Thotmes and Seti overran the then known world and took tribute of it; but it was a temporary wave of conquest and not an assimilation. Rome sent her laws and her roads to the end of the earth, and made an empire of it; but it was an empire of barbarians largely, of dynasties rather than of peoples. The dynasties fought, the dynasties submitted, and the dynasties paid the tribute. The modern "people" did not exist. One battle decided the fate of half the world—it might be lost or won for a woman's eyes; the flight of a chieftain might settle the fate of a province; a campaign might determine the allegiance of half Asia. There was but one compact, disciplined, law-ordered nation, and that had its seat on the Tiber.

Under what different circumstances did England win her position! Before she came to the front, Venice controlled, and almost monopolized, the trade of the Orient. When she entered upon her career Spain was almost omnipotent in Europe, and was in possession of more than half the Western world; and besides Spain, England had, wherever she went, to contend for a foothold with Portugal, skilled in trade and adventure; and with Holland, rich, and powerful on the sea. That is to say, she met everywhere civilizations old and technically her superior....