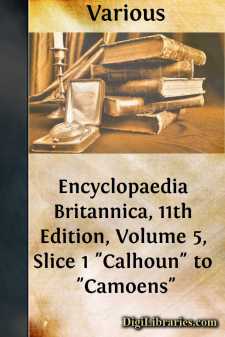 CALHOUN, JOHN CALDWELL (1782-1850), American statesman and parliamentarian, was born, of Scottish-Irish descent, in Abbeville District, South Carolina, on the 18th of March 1782. His father, Patrick Calhoun, is said to have been born in Donegal, in North Ireland, but to have left Ireland when a mere child. The family seems to have emigrated first to Pennsylvania, whence they removed, after Braddock’s defeat, to Western Virginia. From Virginia they removed in 1756 to South Carolina and settled on Long Cane Creek, in Granville (now Abbeville) county. Patrick Calhoun attained some prominence in the colony, serving in the colonial legislature, and afterwards in the state legislature, and taking part in the War of Independence. In 1770 he had married Martha Caldwell, the daughter of another Scottish-Irish settler.

The opportunities for obtaining a liberal education in the remote districts of South Carolina at that time were scanty. Fortunately, young Calhoun had the opportunity, although late, of studying under his brother-in-law, the Rev. Moses Waddell (1770-1840), a Presbyterian minister, who afterwards, from 1819 to 1829, was president of the University of Georgia. In 1802 Calhoun entered the junior class in Yale College, and graduated with distinction in 1804. He then studied first at the famous law school in Litchfield, Conn., and afterwards in a law office in Charleston, S.C., and in 1807 was admitted to the bar. He began practice in his native Abbeville District, and soon took a leading place in his profession. In 1808 and 1809 he was a member of the South Carolina legislature, and from 1811 to 1817 was a member of the national House of Representatives.

When he entered the latter body the strained relations between Great Britain and the United States formed the most important question for the deliberation of Congress. Henry Clay, the Speaker of the House, being eager for war and knowing Calhoun’s hostility to Great Britain, gave him the second place on the committee of foreign affairs, of which he soon became the actual head. In less than three weeks the committee reported resolutions, evidently written by Calhoun, recommending preparations for a struggle with Great Britain; and in the following June Calhoun submitted a second report urging a formal declaration of war. Both sets of resolutions the House adopted. Clay and Calhoun did more, probably, than any other two men in Congress to force the reluctant president into beginning hostilities.

In 1816 Calhoun delivered in favour of a protective tariff a speech that was ever after held up by his opponents as evidence of his inconsistency in the tariff controversy. The embargo and the war had crippled American commerce, but had stimulated manufactures. With the end of the Napoleonic wars in Europe the industries of the old world revived, and Americans began to feel their competition. In the consequent distress in the new industrial centres there arose a cry for protection. Calhoun, believing that there was a natural tendency in the United States towards the development of manufactures, supported the Tariff Bill of 1816, which laid on certain foreign commodities duties higher than were necessary for the purposes of revenue....