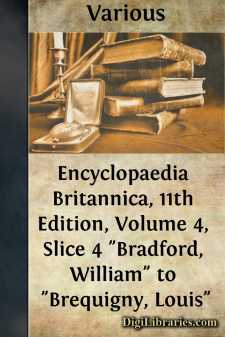 BRADFORD, WILLIAM (1590-1657), American colonial governor and historian, was born in Austerfield, Yorkshire, England, probably in March 1590. He became somewhat estranged from his family, which was one of considerable importance in the locality, when in early youth he joined the Puritan sect known as Separatists, and united in membership with the congregation at Scrooby. He prepared in 1607, with other members of the church, to migrate to Holland, but the plan was discovered and several of the leaders, among them Bradford, were imprisoned. In the year following, however, he joined the English colony at Amsterdam, where he learned the trade of silk weaving. He subsequently sold his Yorkshire property and embarked in business on his own account at Leiden, where the English refugees had removed. He became an active advocate of the proposed emigration to America, was one of the party that sailed in the “Mayflower” in September 1620, and was one of the signers of the compact on shipboard in Cape Cod Bay. After the death of Governor John Carver in April 1621, Bradford was elected governor of Plymouth Colony, and served as such, with the exception of five years (1633, 1634, 1636, 1638 and 1644) until shortly before his death. After 1624, at Bradford’s suggestion, a board of five and later seven assistants was chosen annually to share the executive responsibility. Bradford’s rule was firm and judicious, and to his guidance more than to that of any other man the prosperity of the Plymouth Colony was due. His tact and kindness in dealing with the Indians helped to relieve the colony from the conflicts with which almost every other settlement was afflicted. In 1630 the council for New England granted to “William Bradford, his heires, associatts, and assignes,” a new patent enlarging the original grant of territory made to the Plymouth settlers. This patent Bradford in the name of the trustees made over to the body corporate of the colony in 1641. Bradford died in Plymouth on the 9th of May 1657. He was the author of a very important historical work, the History of Plimouth Plantation (until 1646), first published in the Proceedings of the Massachusetts Historical Society for 1856, and later by the state of Massachusetts (Boston, 1898), and in facsimile, with an introduction by John A. Doyle, in 1896. The manuscript disappeared from Boston during the War of Independence, was discovered in the Fulham library, London, in 1855, and was returned by the bishop of London to the state of Massachusetts in 1897. This work has been of inestimable value to writers on the history of the Pilgrims, and was freely used, in manuscript, by Morton, Hubbard, Mather, Prince and Hutchinson. Bradford was also undoubtedly part author, with Edward Winslow, of the “Diary of Occurrences” published in Mourts’ Relation, edited by Dr H.M. Dexter (Boston, 1865). He also wrote a series of Dialogues, on church government, published in the Massachusetts Historical Society’s Publications (1870.)