Emerson and Other Essays 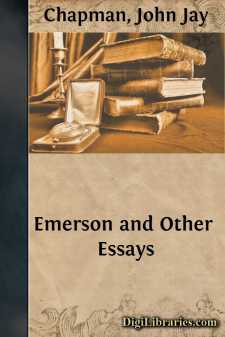 "Leave this hypocritical prating about the masses. Masses are rude, lame, unmade, pernicious in their demands and influence, and need not to be flattered, but to be schooled. I wish not to concede anything to them, but to tame, drill, divide, and break them up, and draw individuals out of them. The worst of charity is that the lives you are asked to preserve are not worth preserving. Masses! The calamity is the masses. I do not wish any mass at all, but honest men only, lovely, sweet, accomplished women only, and no shovel-handed, narrow-brained, gin-drinking million stockingers or lazzaroni at all. If government knew how, I should like to see it check, not multiply the population. When it reaches its true law of action, every man that is born will be hailed as essential. Away with this hurrah of masses, and let us have the considerate vote of single men spoken on their honor and their conscience."

This extract from The Conduct of Life gives fairly enough the leading thought of Emerson's life. The unending warfare between the individual and society shows us in each generation a poet or two, a dramatist or a musician who exalts and deifies the individual, and leads us back again to the only object which is really worthy of enthusiasm or which can permanently excite it,—the character of a man. It is surprising to find this identity of content in all great deliverances. The only thing we really admire is personal liberty. Those who fought for it and those who enjoyed it are our heroes.

But the hero may enslave his race by bringing in a system of tyranny; the battle-cry of freedom may become a dogma which crushes the soul; one good custom may corrupt the world. And so the inspiration of one age becomes the damnation of the next. This crystallizing of life into death has occurred so often that it may almost be regarded as one of the laws of progress.

Emerson represents a protest against the tyranny of democracy. He is the most recent example of elemental hero-worship. His opinions are absolutely unqualified except by his temperament. He expresses a form of belief in the importance of the individual which is independent of any personal relations he has with the world. It is as if a man had been withdrawn from the earth and dedicated to condensing and embodying this eternal idea—the value of the individual soul—so vividly, so vitally, that his words could not die, yet in such illusive and abstract forms that by no chance and by no power could his creed be used for purposes of tyranny. Dogma cannot be extracted from it. Schools cannot be built on it. It either lives as the spirit lives, or else it evaporates and leaves nothing. Emerson was so afraid of the letter that killeth that he would hardly trust his words to print. He was assured there was no such thing as literal truth, but only literal falsehood. He therefore resorted to metaphors which could by no chance be taken literally. And he has probably succeeded in leaving a body of work which cannot be made to operate to any other end than that for which he designed it....