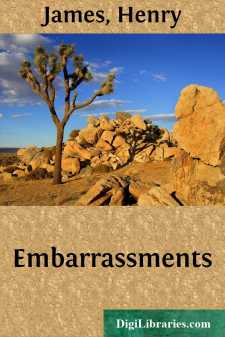 I had done a few things and earned a few pence—I had perhaps even had time to begin to think I was finer than was perceived by the patronising; but when I take the little measure of my course (a fidgety habit, for it's none of the longest yet) I count my real start from the evening George Corvick, breathless and worried, came in to ask me a service. He had done more things than I, and earned more pence, though there were chances for cleverness I thought he sometimes missed. I could only however that evening declare to him that he never missed one for kindness. There was almost rapture in hearing it proposed to me to prepare for __The Middle__, the organ of our lucubrations, so called from the position in the week of its day of appearance, an article for which he had made himself responsible and of which, tied up with a stout string, he laid on my table the subject. I pounced upon my opportunity—that is on the first volume of it—and paid scant attention to my friend's explanation of his appeal. What explanation could be more to the point than my obvious fitness for the task? I had written on Hugh Vereker, but never a word in The Middle, where my dealings were mainly with the ladies and the minor poets. This was his new novel, an advance copy, and whatever much or little it should do for his reputation I was clear on the spot as to what it should do for mine. Moreover, if I always read him as soon as I could get hold of him, I had a particular reason for wishing to read him now: I had accepted an invitation to Bridges for the following Sunday, and it had been mentioned in Lady Jane's note that Mr. Vereker was to be there. I was young enough to have an emotion about meeting a man of his renown, and innocent enough to believe the occasion would demand the display of an acquaintance with his "last."

Corvick, who had promised a review of it, had not even had time to read it; he had gone to pieces in consequence of news requiring—as on precipitate reflection he judged—that he should catch the night-mail to Paris. He had had a telegram from Gwendolen Erme in answer to his letter offering to fly to her aid. I knew already about Gwendolen Erme; I had never seen her, but I had my ideas, which were mainly to the effect that Corvick would marry her if her mother would only die. That lady seemed now in a fair way to oblige him; after some dreadful mistake about some climate or some waters, she had suddenly collapsed on the return from abroad. Her daughter, unsupported and alarmed, desiring to make a rush for home but hesitating at the risk, had accepted our friend's assistance, and it was my secret belief that at the sight of him Mrs. Erme would pull round. His own belief was scarcely to be called secret; it discernibly at any rate differed from mine. He had showed me Gwendolen's photograph with the remark that she wasn't pretty but was awfully interesting; she had published at the age of nineteen a novel in three volumes, "Deep Down," about which, in The Middle, he had been really splendid. He appreciated my present eagerness and undertook that the periodical in question should do no less; then at the last, with his hand on the door, he said to me: "Of course you'll be all right, you know." Seeing I was a trifle vague he added: "I mean you won't be silly."

"Silly—about Vereker! Why, what do I ever find him but awfully clever?"

"Well, what's that but silly? What on earth does 'awfully clever' mean? For God's sake try to get at him. Don't let him suffer by our arrangement. Speak of him, you know, if you can, as should have spoken of him."

I wondered an instant. "You mean as far and away the biggest of the lot—that sort of thing?"

Corvick almost groaned. "Oh, you know, I don't put them back to back that way; it's the infancy of art! But he gives me a pleasure so rare; the sense of "—he mused a little—"something or other."

I wondered again. "The sense, pray, of what?"

"My dear man, that's just what I want you to say!"

Even before Corvick had banged the door I had begun, book in hand, to prepare myself to say it. I sat up with Vereker half the night; Corvick couldn't have done more than that. He was awfully clever—I stuck to that, but he wasn't a bit the biggest of the lot. I didn't allude to the lot, however; I flattered myself that I emerged on this occasion from the infancy of art. "It's all right," they declared vividly at the office; and when the number appeared I felt there was a basis on which I could meet the great man; It gave me confidence for a day or two, and then that confidence dropped. I had fancied him reading it with relish, but if Corvick was not satisfied how could Vereker himself be? I reflected indeed that the heat of the admirer was sometimes grosser even than the appetite of the scribe. Corvick at all events wrote me from Paris a little ill-humouredly....