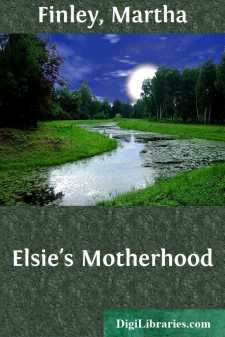 "Meantime a smiling offspring rises round,And mingles both their graces. By degreesThe human blossom blows, and every day,Soft as it rolls along, shows some new charm,The father's lustre, and the mother's bloom."—Thomson's Seasons

"Mamma! Papa too!" It was a glad shout of a chorus of young voices as four pairs of little feet came pattering up the avenue and into the veranda; then as many ruby lips were held up for the morning kiss from the children's dearly loved father.

They had already had their half hour with mamma, which made so sweet a beginning of each day, yet she too must have a liberal share of the eagerly bestowed caresses; while Bruno, a great Newfoundland, the pet, playfellow, and guardian of the little flock, testified his delight in the scene by leaping about among them, fawning upon one and another, wagging his tail, and uttering again and again a short, joyous bark.

Then followed a merry romp, cut short by the ringing of the breakfast bell, when all trooped into the house, Harold riding on papa's shoulder, mamma following with Elsie, Eddie and Vi; while Dinah, with Baby Herbert in her arms; brought up the rear.

The children had been very gay, full of laughter and sweet innocent prattle, but a sudden hush fell upon them when seated about the table in the bright, cheerful breakfast parlor; little hands were meekly folded and each young head bent reverently over the plate, while in a few simple words which all could understand, their father gave God thanks for their food and asked his blessing upon it.

The Ion children were never rude even in their play, and their table manners were almost perfect; made the constant companions of cultivated, refined parents—whose politeness springing from genuine unselfishness, was never laid aside, but shown on all occasions and to rich and poor, old and young alike—and governed with a wise mixture of indulgence and restraint, mildness and firmness, they imitated the copies set before them and were seldom other than gentle and amiable in their deportment, not only toward their superiors, but to equals and inferiors also.

They were never told that "children should be seen and not heard," but when no guests were present, were allowed to talk in moderation; a gentle word or look of reproof from papa or mamma being quite sufficient to check any tendency to boisterousness or undue loquacity.

"I think we should celebrate this anniversary, Elsie," remarked Mr. Travilla, stirring his coffee and gazing with fond admiration into the sweet face at the opposite end of the table.

"Yes, sir, though we are rather late in thinking of it," she answered smilingly, the rose deepening slightly on her cheek as delicately rounded and tinted as it had been ten years ago.

Little Elsie looked up inquiringly. "What is it, papa? I do not remember."

"Do you not? Ten years ago to-day there was a grand wedding at the Oaks, and your mamma and I were there."

"Yes, course, Eddie," spoke up five year old Violet, "grandpa would 'vite you and all of us; and I b'lieve I 'member a little about it."

There was a general laugh, the two little prattlers joining in right merrily....