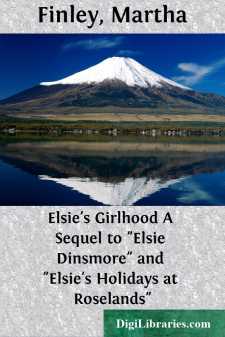 It is a busy, talking world.

"I think I shall enjoy the fortnight we are to spend here, papa; it seems such a very pleasant place," Elsie remarked, in a tone of great satisfaction.

"I am glad you are pleased with it, daughter," returned Mr. Dinsmore, opening the morning paper, which John had just brought up.

They—Mr. Dinsmore and Elsie, Rose and Edward Allison—were occupying very comfortable quarters in a large hotel at one of our fashionable watering-places. A bedroom for each, and a private parlor for the joint use of the party, had been secured in advance, and late the night before they had arrived and taken possession.

It was now early in the morning, Elsie and her papa were in his room, which was in the second story and opened upon a veranda, shaded by tall trees, and overlooking a large grassy yard at the side of the building. Beyond were green fields, woods, and hills.

"Papa," said Elsie, gazing longingly upon them, as she stood by the open window, "can't we take a walk?"

"When Miss Rose is ready to go with us."

"May I run to her door and ask if she is?—and if she isn't, may I wait for her out here on the veranda?"

She skipped away, but was back again almost immediately. "Papa, what do you think? It's just too bad!"

"What is too bad, daughter? I think I never before saw so cross a look on my little girl's face," he said, peering at her over the top of his newspaper. "Come here, and tell me what it is all about."

She obeyed, hanging her head and blushing. "I think I have some reason to be cross, papa," she said; "I thought we were going to have such a delightful time here, and now it is all spoiled. You could never guess who has the rooms just opposite ours; on the other side of the hall."

"I knew she was in the house, because I saw her name in the hotel book last night when I went to register ours."

"And it just spoils all our pleasure."

"I hope not, daughter. I think she will hardly annoy you when you are close at my side; and that is pretty much all the time, isn't it?"

"Yes, papa, and I'll stick closer than ever to you if that will make her let me alone," she cried, with a merry laugh, putting her arm round his neck and kissing him two or three times.

"Ah, now I have my own little girl again," he said, drawing her to his knee and returning her caresses with interest: "But there, I hear Miss Rose's step in the hall. Run to mammy and have your hat put on."

Miss Stevens' presence proved scarcely less annoying to Elsie than the child had anticipated. She tried to keep out of the lady's way, but it was quite impossible. She could scarcely step out on the veranda, go into the parlor, or take a turn in the garden by herself, but in a moment Miss Stevens was at her side fawning upon and flattering her—telling her how sweet and pretty and amiable she was, how dearly she loved her, and how much she thought of her papa too: he was so handsome and so good; everybody admired him and thought him such a fine-looking gentleman, so polished in his manners, so agreeable and entertaining in conversation....