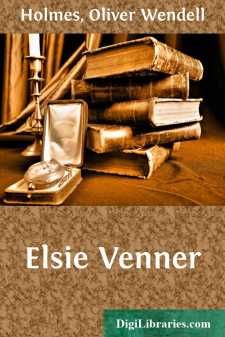 CHAPTER I. THE BRAHMIN CASTE OF NEW ENGLAND.

There is nothing in New England corresponding at all to the feudal aristocracies of the Old World. Whether it be owing to the stock from which we were derived, or to the practical working of our institutions, or to the abrogation of the technical "law of honor," which draws a sharp line between the personally responsible class of "gentlemen" and the unnamed multitude of those who are not expected to risk their lives for an abstraction,—whatever be the cause, we have no such aristocracy here as that which grew up out of the military systems of the Middle Ages.

What we mean by "aristocracy" is merely the richer part of the community, that live in the tallest houses, drive real carriages, (not "kerridges,") kidglove their hands, and French-bonnet their ladies' heads, give parties where the persons who call them by the above title are not invited, and have a provokingly easy way of dressing, walking, talking, and nodding to people, as if they felt entirely at home, and would not be embarrassed in the least, if they met the Governor, or even the President of the United States, face to face. Some of these great folks are really well-bred, some of them are only purse-proud and assuming,—but they form a class, and are named as above in the common speech.

It is in the nature of large fortunes to diminish rapidly, when subdivided and distributed. A million is the unit of wealth, now and here in America. It splits into four handsome properties; each of these into four good inheritances; these, again, into scanty competences for four ancient maidens,—with whom it is best the family should die out, unless it can begin again as its great-grandfather did. Now a million is a kind of golden cheese, which represents in a compendious form the summer's growth of a fat meadow of craft or commerce; and as this kind of meadow rarely bears more than one crop, it is pretty certain that sons and grandsons will not get another golden cheese out of it, whether they milk the same cows or turn in new ones. In other words, the millionocracy, considered in a large way, is not at all an affair of persons and families, but a perpetual fact of money with a variable human element, which a philosopher might leave out of consideration without falling into serious error. Of course, this trivial and, fugitive fact of personal wealth does not create a permanent class, unless some special means are taken to arrest the process of disintegration in the third generation. This is so rarely done, at least successfully, that one need not live a very long life to see most of the rich families he knew in childhood more or less reduced, and the millions shifted into the hands of the country-boys who were sweeping stores and carrying parcels when the now decayed gentry were driving their chariots, eating their venison over silver chafing-dishes, drinking Madeira chilled in embossed coolers, wearing their hair in powder, and casing their legs in long boots with silken tassels.

There is, however, in New England, an aristocracy, if you choose to call it so, which has a far greater character of permanence....