Elsie in the South 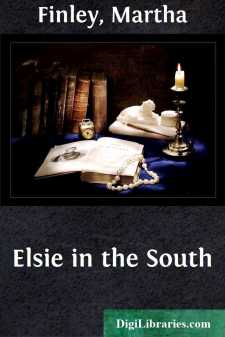 "What a storm! there will be no going out to-day even for the early stroll about the grounds with papa," sighed Lucilla Raymond one December morning, as she lay for a moment listening to the dash of rain and sleet against her bedroom windows. "Ah, well! I must not fret, knowing who appoints the changes of the seasons, and that all He does is for the best," her thoughts ran on. "Besides, what pleasures we can all have within doors in this sweetest of homes and with the dearest and kindest of fathers!"

With that she left her bed and began the duties of the toilet, first softly closing the communicating door between her own and her sister's sleeping apartments lest she should disturb Grace's slumbers, then turning on the electric light in both bedroom and bathroom, for, though after six, it was still dark.

The clock on the mantel struck seven before she was quite through with these early morning duties, but the storm had in no wise abated in violence, and as she heard it she felt sure that outdoor exercise was entirely out of the question.

"And I'll not see Chester to-day," she sighed half-aloud. "It was evident when he was here last night that he had taken a cold, and I hope he won't think of venturing out in such weather as this."

Just then the door into Grace's room opened and her sweet voice said, "Good-morning, Lu. As usual, you are up and dressed before your lazy younger sister has begun the duties of the toilet."

"Take care what you say, young woman," laughed Lucilla, facing round upon her. "I am not going to have my delicate younger sister slandered in that fashion. She is much too feeble to leave her bed at the early hour which suits her older and stronger sister."

"Very kind in you to see it in that light," laughed Grace. "But I must make haste now with my dressing. Papa may be coming in directly, for it is certainly much too stormy for him and you to take your usual stroll in the grounds."

"It certainly is," assented Lu. "Just listen to the hail and rain dashing against the windows. And there comes papa now," she added, as a tap was heard at their sitting-room door.

She ran to open it and receive the fatherly caress that always accompanied his morning greeting to each one of his children.

"Grace is not up yet?" he said inquiringly, as he took possession of an easy-chair.

"Yes, papa, but not dressed yet; so that I shall have you to myself for a while," returned Lu in a cheery tone and seating herself on an ottoman at his knee.

"A great privilege that," he said with a smile, passing a hand caressingly over her hair as he spoke. "It is storming hard, so that you and I must do without our usual early exercise about the grounds."

"Yes, sir; and I am sorry to miss it, though a chat with my father here and now is not so bad an exchange."

"I think we usually have that along with the walk," he said, smiling down into the eyes that were gazing so lovingly up into his.

"Yes, sir, so we do; and you always manage to make the shut-in days very enjoyable."