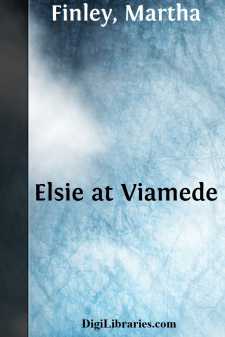 It was a beautiful evening at Viamede: the sun nearing its setting, shadows sleeping here and there upon the velvety flower-bespangled lawn, and filling the air with their delicious perfume, the waters of the bayou beyond reflecting the roseate hues of the sunset clouds, and the song of some negro oarsmen, in a passing boat, coming to the ear in pleasantly mellowed tones. Tea was over, and the family had all gathered upon the veranda overlooking the bayou. A momentary silence was broken by Rosie's pleasant voice:

"Mamma, I wish you or grandpa, or the captain, would tell the story of Jackson's defence of New Orleans. Now while we are in the neighborhood we would all, I feel sure, find it very interesting. I think you have been going over Lossing's account of it, mamma," she added laughingly, "for I found his 'Pictorial History of the War of 1812' lying on the table in your room, with a mark in at that part."

"Yes, I had been refreshing my memory in that way," returned her mother, smiling pleasantly into the dark eyes gazing so fondly and entreatingly into hers. "And," she added, "I have no objection to granting your request, except that I do not doubt that either your grandfather or the captain could do greater justice to the subject than I," glancing inquiringly from one to the other.

"Captain, I move that you undertake the task," said Mr. Dinsmore. "You are, no doubt, better prepared to do it justice than I, and I would not have my daughter fatigued with the telling of so long a story."

"Always so kindly careful of me, my dear father," remarked Mrs. Travilla in a softly spoken aside.

"I am doubtful of my better preparation for the telling of the story, sir," returned the captain in his pleasant tones, "but if both you and mother are disinclined for the exertion I am willing to undertake the task."

"Yes, do, captain; do, papa," came in eager tones from several young voices, and lifting baby Ned to one knee, Elsie to the other, while the rest of the young members of the household grouped themselves about him, he began his story after a slight pause to collect his thoughts.

"You all, I think, have more or less knowledge of the War of 1812-14, which finished the work of separation from the mother country so nearly accomplished by the War of the Revolution. Upon the close of that earlier contest, England, it is true, acknowledged our independence, but evidently retained a hope of finally recovering her control here.

"All through the intervening years, our sailors on our merchant vessels, and even, in some instances, those belonging to our navy, were subjected to insults and oppression when met on the high seas by the more powerful ones of the English. The conduct of British officers—claiming the right to search our vessels for deserters from theirs, and often seizing American born men as such—was most gallingly insulting; the wrongs thus inflicted upon our poor seamen were enough to rouse the anger and indignation of the meekest of men. The clearest proofs of citizenship availed nothing; they were seized, carried forcibly aboard the British ships, and, if they refused to serve their captors, were brutally flogged again and again....