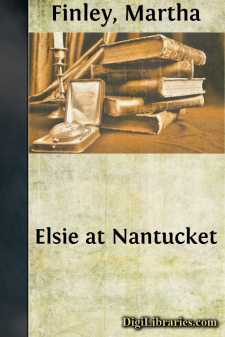 "How happy they,Who from the toil and tumult of their livesSteal to look down where naught but ocean strives."

"Well, captain, for how long have you Uncle Sam's permission to stay on shore this time?" asked Mr. Dinsmore, as the family at Ion sat about the breakfast-table on the morning after Captain Raymond's arrival.

"Just one month certain, sir, with the possibility that the leave of absence may be extended," was the reply, in a cheery tone; "and as I want to make the very most of it, I propose that our plans for a summer outing be at once discussed, decided upon, and carried out."

"I second the motion," said Mr. Dinsmore. "Are all the grown people agreed? The consent of the younger ones may safely be taken for granted," he added, with a smiling glance from one to another.

"I am agreed and ready for suggestions," replied his wife.

"And I," said his daughter.

"Vi is, of course, since the proposition comes from her husband," Edward remarked, with a sportive look at her; then glancing at his own little wife: "and as I approve, Zoe will be equally ready with her consent."

"Have you any suggestion to offer, captain?" asked Mr. Dinsmore.

"I have, sir; and it is that we make the island of Nantucket our summer resort for this year, dividing the time, if you like, between Nantucket Town and the quaint little fishing village Siasconset, or 'Sconset, as they call it for short. There is an odd little box of a cottage there belonging to a friend of mine, a Captain Coffin, which I have partially engaged until the first of September. It wouldn't hold nearly all of us, but we may be able to rent another for the season, or we can pitch a tent or two, and those who prefer it can take rooms, with or without board, at the hotels or boarding-houses. What do you all say?" glancing from his mother-in-law to his wife.

"It sounds very pleasant, captain," Elsie said; "but please tell us more about it; I'm afraid I must acknowledge shameful ignorance of that portion of my native land."

"A very small corner of the same, yet a decidedly interesting one," returned the captain; then went on to give a slight sketch of its geography and history.

"It is about fifteen miles long, and averages four in width. Nantucket Town is a beautiful, quaint old place; has some fine wide streets and handsome residences, a great many narrow lanes running in all directions, and many very odd-looking old houses, some of them inhabited, but not a few empty; for of the ten thousand former residents only about three thousand now remain."

"How does that happen, Levis?" asked Violet, as he paused for a moment.

"It used to be a great seat of the whale-fishery," he answered; "indeed, that was the occupation of the vast majority of the men of the island; but, as I presume you know, the whale-fishery has, for a number of years, been declining, partly owing to the scarcity of whales, partly to the discovery of coal-oil, which has been largely substituted for whale-oil as an illuminant (as has gas also, by the way), and to substitutes being found or invented for whale-bone also....