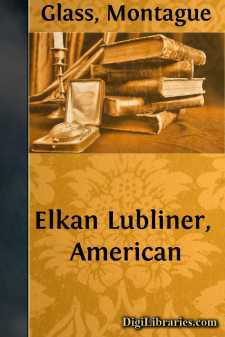 "NU, PHILIP," cried Marcus Polatkin to his partner, Philip Scheikowitz, as they sat in the showroom of their place of business one June morning, "even if the letter does got bad news in it you shouldn't take on so hard. When a feller is making good over here and the Leute im Russland hears about it, understand me, they are all the time sending him bad news. I got in Minsk a cousin by the name Pincus Lubliner, understand me, which every time he writes me, y'understand, a relation dies on him and he wants me I should help pay funeral expenses. You might think I was a Free Burial Society, the way that feller acts."

"Sure, I know," Philip replied as he folded the letter away; "but this here is something else again. Mind you, with his own landlord he is sitting playing cards, Marcus, and comes a pistol through the window and the landlord drops dead."

"What have you got to do with the landlord?" Polatkin retorted. "If it was your brother-in-law was killed that's a difference matter entirely; but when a feller is a landlord im Russland, understand me, the least he could expect is that he gets killed once in a while."

"I ain't saying nothing about the landlord," Philip protested, "but my brother-in-law writes they are afraid for their lives there and I should send 'em quick the passage money for him and his boy Yosel to come to America."

Polatkin rose to his feet and glared angrily at his partner.

"Do you mean to told me you are going to send that loafer money he should come over here and bum round our shop yet?"

"What do you mean bum round our shop?" Philip demanded. "In the first place, Polatkin, I ain't said I am going to send him money, y'understand; and, in the second place, if I want to send the feller money to come over here, understand me, that's my business. Furthermore, when you are coming to call my brother-in-law a loafer and a bum, Polatkin, you don't know what you are talking about. His Grossvater, olav hasholem, was the great Harkavy Rav, Jochannon Borrochson."

"Sure, I know," Philip cried, "your father would be glad supposing he could sign his name even."

"It would oser worry me if my whole family couldn't read or write. So long as I can sign my name and the money is in the bank to make the check good from five to ten thousand dollars, y'understand, what do I care if my grandfather would be deef, dumb and blind, Scheikowitz? Furthermore, Scheikowitz, believe me I would sooner got one good live business man for a partner, Scheikowitz, than a million dead rabbis for a grandfather, and don't you forget it. So if you are going to spend the whole morning making a Geschreierei over that letter, Scheikowitz, we may as well close up the store und fertig."

With this ultimatum Marcus Polatkin walked rapidly away toward the cutting room, while Philip Scheikowitz sought the foreman of their manufacturing department and borrowed a copy of a morning paper....