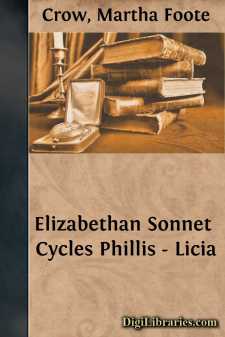 The last decade of the sixteenth century was marked by an outburst of sonneteering. To devotees of the sonnet, who find in that poetic form the moat perfect vehicle that has ever been devised for the expression of a single importunate emotion, it will not seem strange that at the threshold of a literary period whose characteristic note is the most intense personality, the instinct of poets should have directed them to the form most perfectly fitted for the expression of this inner motive.

The sonnet, a distinguished guest from Italy, was ushered to by those two "courtly makers," Wyatt and Surrey, in the days of Henry VIII. But when, forty years later, the foreigner was to be acclimatised in England, her robe had to be altered to suit an English fashion. Thus the sonnet, which had been an octave of enclosed or alternate rhymes, followed by a sestette of interlaced tercets, was now changed to a series of three quatrains with differing sets of alternate rhymes in each, at the close of which the insidious couplet succeeded in establishing itself. But these changes were not made without a great deal of experiment; and during the tentative period the name "sonnet" was given, to a wide variety of forms, in the moulding of which but one rule seemed to be uniformly obeyed—that the poem should be the expression of a single, simple emotion. This law cut the poem, to a relative shortness and defined its dignity and clearness. Beyond this almost every combination of rhymes might be found, verses were occasionally lengthened or shortened, and the number of lines in the poem, though generally fourteen, showed considerable variation.

The sonnet-sequence was also a suggestion from Italy, a literary fashion introduced by Sir Philip Sidney, in his Astrophel and Stella, written soon after 1580, but not published till 1591. In a sonnet-cycle Sidney recorded his love and sorrow, and Spenser took up the strain with his story of love and joy. Grouped about these, and following in their wake, a number of poets, before the decade was over, turned this Elizabethan "toy" to their purpose in their various self-revealings, producing a group of sonnet-cycles more or less Italianate in form or thought, more or less experimental, more or less poetical, more or less the expression of a real passion. For while the form of the sonnet was modified by metrical traditions and habits, the content also was strongly influenced, not to say restricted, by certain conventions of thought considered at the time appropriate to the poetic attitude. The passion for classic colour in the poetic world, which had inspired and disciplined English genius in the sixties and seventies, was rather nourished than repressed when in the eighties Spenser's Shepherd's Calendar and Sidney's Arcadia made the pastoral imagery a necessity. Cupid and Diana were made very much at home in the golden world of the renaissance Arcadia, and the sonneteer singing the praises of his mistress's eyebrow was not far removed from the lovelorn shepherd of the plains....