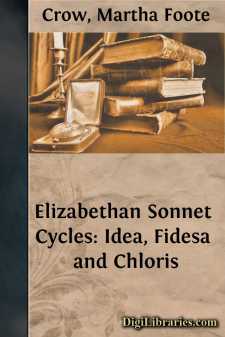 The true story of the life of Michael Drayton might be told to, vindicate the poetic traditions of the olden time. A child-poet wandering in fay-haunted Arden, or listening to the harper that frequented the fireside of Polesworth Hall where the boy was a petted page, later the honoured almoner of the bounty of many patrons, one who "not unworthily," as Tofte said, "beareth the name of the chiefest archangel, singing after this soule-ravishing manner," yet leaving but "five pounds lying by him at his death, which was satis viatici ad cœlum"—is not this the panorama of a poetic career? But above all, to complete the picture of the ideal poet, he worshipped, and hopelessly, from youth to age the image of one, woman. He never married, and while many patronesses were honoured with his poetic addresses, there was one fair dame to whom he never offered dedicatory sonnet, a silence that is full of meaning. Yet the praises of Idea, his poetic name for the lady of his admiration and love, are written all over the pages of his voluminous lyrical and chorographical and historical poems, and her very name is quaintly revealed to us. Anne Goodere was the younger daughter in the noble family where Drayton was bred and educated; and one may picture the fair child standing "gravely merry" by the little page to listen to "John Hews his lyre," at that ancestral fireside. "Where I love, I love for years," said Drayton in 1621. As late as 1627, but four years before his death, he writes an elegy of his lady's not coming to London, in which he complains that he has been starved for her short letters and has had to read last year's over again. About the same time he is writing that immortal sonnet, the sixty-first, the one that Rossetti, with perhaps something too much of partiality, has declared to be almost, if not quite, the best in the language. The tragedy of a whole life is concentrated in that sonnet, and the heart-pang in it is unmistakable. But Drayton had stood as witness to the will of Anne's father, by which £1500 was set down for her marriage portion. She was an heiress, he a penniless poet, and what was to be done?

About 1590, when Drayton was twenty-eight, and Anne was probably twenty-one years old, Drayton left Polesworth Hall and came to London. Perhaps the very parting was the means of revealing his heart to himself, for it is from near this time that, as he confesses later, he dates the first consciousness of his love. He soon publishes Idea, the Shepherd's Garland, Rowland's Sacrifice to the Nine Muses, where we first see our poet, in his pastoral-poetic character, carving his "rime of love's idolatry," upon a beechen tree. Thirteen stanzas of these pastoral eclogues do not exhaust the catalogue of her beauties; and when he praises the proportion of her shape and carriage, we know that it was not the poet's frenzied eye alone that saw these graces, for Dr. John Hall, of Stratford, who attended her professionally, records in his case-book that she was "beautiful and of gallant structure of body." Anne was married about 1595 to Sir Henry Rainsford, who became Drayton's friend, host and patron. It is likely that Lady Rainsford deserved a goodly portion of the praises bestowed upon her beauty. And she need not have been ashamed of the devotion of her knight of poesy; for Michael Drayton was, like Constable and Daniel and Fletcher, a man good and true, and the chorus of contemporaries that praise his character and his verse is led by pious Meres himself, and echoed by Jonson.

Idea's Mirrour, Amours in Quatorzains, formed the title under which the sonnet-cycle appeared in 1594. Idea was reprinted eight times before 1637, the edition of 1619 being the chief and serving for the foundation of our text. Many changes and additions were made by the author in the successive editions; in fact only twenty of the fifty-one "amours" in Idea's Mirrour escaped the winnowing, while the famous sixty-first appears for the first time in 1619. There is a distinct progress manifest in the subdual of language and form to artistic finish, and while the cycle in its unevenness represents the early and late stages of poetic progress, the more delicate examples of his work show him worthy of the praise bestowed by his latest admirer and critic,

It will be noted that, while many rhyme-arrangements are experimented upon, the Shakespearean or quatrain-and-couplet form predominates. In the less praiseworthy sonnets he is found to lack grammatical clamping and to allow frequent faults in rhythm, and he toys with the glittering and soulless conceit as much as any; but where his individuality has fullest sway, as in the picturesque Arden memory of the fifty-third, the personal reminiscences of the Ankor sonnets, and the vivid theatre theme of the forty-seventh, in what Main calls that "magical realisation of the spirit of evening" in the thirty-seventh, and above all in the naïve and passionate sixty-first, there is a rude strength that pierces beneath the formalities and touches and moves the heart. Drayton, like Sidney and Daniel and Shakespeare, draws freely upon the general thought-storehouse of the Italianate sonneteers: time and the transitoriness of beauty, the lover's extremes, the Platonic ideas of soul-functions and of love-madness, the phoenix and Icarus and all the classic gods, engage his fancy first or last; and no sonnet trifler has been more attracted by the great theme of immortality in verse than he....