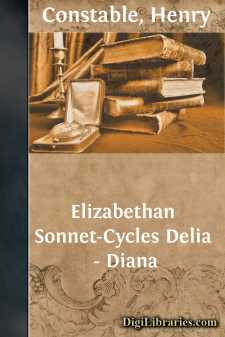 Daniel's sonnet series has been by many regarded as the prototype of Shakespeare's. It is true that several of Daniel's themes are repeated in the cycle composed by the greater poet. The ideas of immortality in verse, the transitoriness of beauty, the assurances of truth, the humility and the woes of the lover, the pain of separation and the comfort of night thoughts, shape the mood of both poets. But these motives are also found in the pages of many other sonneteers of the time. All these devotees seem to have had a storehouse of poetic conceits which they held in common, and from which each poet had the right to draw materials to use in his own way. In fact Shakespeare's sonnets are full of echoes from the voices of Sidney, Constable, Davies, Lodge, Watson, Drayton and Barnes, as well as from that mellifluous one of Daniel; and these poetic conceits were tossed forth in the first place by the Italian sonnet makers, led by Petrarch. It is evident that Daniel's Petrarch has been well-thumbed. Wood says that Daniel left Oxford without a degree because "his geny" was "more prone to easier and smoother studies than in pecking and hewing at logic," and we may believe that Italian was one of these smoother studies. His translation of Paolo Giovi's work on Emblems, which was published in 1585, was doubtless one fruit of this study, a work that since it took him into the very realm of the concetti, was to be a potent influence upon his mental growth. The main theme, the cruelty of the Fair, is the same as that of Petrarch. Daniel follows this master in making the vale echo with his sighs, in appealing to her hand and cruel bosom for mercy, in recounting the number of years he has worshipped her and honored her with sonnets on which he is depending for immortal fame, in upbraiding her for her devotion to the mirror rather than to him, and for ensnaring him with the golden net of her hair and transpiercing him with the darts from her crystalline eyes. In some of Petrarch's nobler flights Daniel does not follow; the higher teachings of love are not revealed to him, the step from human to divine he does not take; yet in the main, the features of the earlier poet re-appear in Daniel's verse, as they do in most of his fellow-sonneteers, including Shakespeare.

It is also not best to give too much weight to the opinion that Shakespeare has been over-influenced by Daniel in the adoption of the quatrain and couplet structure. The whole period from Wyatt to Shakespeare shows a slow and steady mastery of the native over the foreign tendency. The change was not a sudden leap on the part of Daniel and Shakespeare, but a gradual growth occupying a half century and culminating in the English form. But if we should feel convinced that Shakespeare's memory was influenced by the sound of Daniel's cadences, this need not be considered discreditable to Shakespeare. Daniel's lines are smooth and melodious, and he was perhaps as great a master of the technique of rhyme as was Shakespeare....