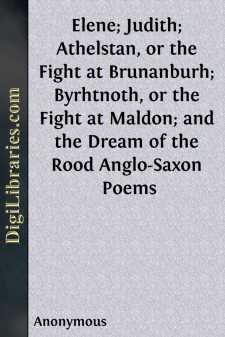 In presenting to the public the following translations of the Old English (Anglo-Saxon) poems, Elene, Judith, Athelstan, Byrhtnoth, and The Dream of the Rood, it is desirable to prefix a brief account of them for the information of the general reader.

I. The Elene, or Helena, is a poem on the expedition of the Empress Helena, mother of Constantine the Great, the first Christian emperor, to Palestine in search of the true cross, and its successful issue. The mediæval legend of the Finding of the Cross is given in the Acta Sanctorum under date of May 4, assigned by the Church to the commemoration of St. Helena's marvellous discovery. The Latin work is the Life of St. Quiriacus, or Cyriacus, Bishop of Jerusalem, that is, the Judas of the poem. It has been usually thought that the Old English poet used this Life as his source; but Glöde, in a recent volume of Anglia (IX. 271 ff.), has given reasons for thinking that the poet used some other Latin text. He rejects ten Brink's conjecture that the legend of Elene had come to England in a Greek form. As to the author of the poem, we know his name, but very little else about him. He has left us his name, imbedded in runic letters as an acrostic, in the last canto of the poem, q.v. These letters spell the word CYNEWULF; but who was Cynewulf? The question is hard to answer, and has given rise to much discussion, which cannot be gone into here. A good summary of it will be found in Wülker's Grundriss zur Geschichte der Angelsächsischen Litteratur (p. 147 ff., 1885), an indispensable work for students of Old English literature. The old view, propounded in the infancy of Anglo-Saxon studies, and held by Kemble, Thorpe, and, doubtfully, Wright, that he was the Abbot of Peterborough and Bishop of Winchester (992-1008), has been abandoned by all scholars, so far as I know, except Professor Earle of Oxford (see his "Anglo-Saxon Literature," p. 228). The later view of Leo, Dietrich, Grein and Rieger, our chief authorities, that he was a Northumbrian, and of Dietrich and Grein, that he was Bishop of Lindisfarne (737-780), has more to be said for it. Sweet and ten Brink also hold that he was a Northumbrian of the eighth century, but not the Bishop of Lindisfarne, while Wülker regards him as a West-Saxon. Professor Henry Morley, in the current edition of his "English Writers," has devoted a chapter (Vol. II. Chap. IX., 1888) to Cynewulf, and virtually concludes that we know nothing about him except that he was a poet and probably lived in the eighth century. We shall not go far wrong in regarding him as a Northumbrian poet of the eighth century, possibly the Bishop of Lindisfarne, even though his works remain to us only in the West-Saxon dialect. As in the Elene, so in the Christ and the Juliana, Cynewulf has left us his name, hence all agree in ascribing to him these poems at least. To these some of the Riddles, if not all, are usually added, but this is now contested. Other poems, as the Guthlac, Phœnix, Christ's Descent into Hell, Andreas, Dream of the Rood, and several other shorter poems, have been ascribed to him with more or less probability, and very recently Sarrazin (in Anglia, IX....