Elements of Chemistry, In a New Systematic Order, Containing all the Modern Discoveries 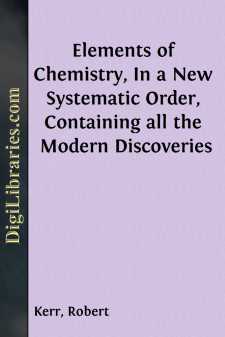 The very high character of Mr Lavoisier as a chemical philosopher, and the great revolution which, in the opinion of many excellent chemists, he has effected in the theory of chemistry, has long made it much desired to have a connected account of his discoveries, and of the new theory he has founded upon the modern experiments written by himself. This is now accomplished by the publication of his Elements of Chemistry; therefore no excuse can be at all necessary for giving the following work to the public in an English dress; and the only hesitation of the Translator is with regard to his own abilities for the task. He is most ready to confess, that his knowledge of the composition of language fit for publication is far inferior to his attachment to the subject, and to his desire of appearing decently before the judgment of the world.

He has earnestly endeavoured to give the meaning of the Author with the most scrupulous fidelity, having paid infinitely greater attention to accuracy of translation than to elegance of stile. This last indeed, had he even, by proper labour, been capable of attaining, he has been obliged, for very obvious reasons, to neglect, far more than accorded with his wishes. The French copy did not reach his hands before the middle of September; and it was judged necessary by the Publisher that the Translation should be ready by the commencement of the University Session at the end of October.

He at first intended to have changed all the weights and measures used by Mr Lavoisier into their correspondent English denominations, but, upon trial, the task was found infinitely too great for the time allowed; and to have executed this part of the work inaccurately, must have been both useless and misleading to the reader. All that has been attempted in this way is adding, between brackets ( ), the degrees of Fahrenheit's scale corresponding with those of Reaumeur's thermometer, which is used by the Author. Rules are added, however, in the Appendix, for converting the French weights and measures into English, by which means the reader may at any time calculate such quantities as occur, when desirous of comparing Mr Lavoisier's experiments with those of British authors.

By an oversight, the first part of the translation went to press without any distinction being preserved between charcoal and its simple elementary part, which enters into chemical combinations, especially with oxygen or the acidifying principle, forming carbonic acid. This pure element, which exists in great plenty in well made charcoal, is named by Mr Lavoisier carbone, and ought to have been so in the translation; but the attentive reader can very easily rectify the mistake. There is an error in Plate XI. which the engraver copied strictly from the original, and which was not discovered until the plate was worked off at press, when that part of the Elements which treats of the apparatus there represented came to be translated. The two tubes 21. and 24. by which the gas is conveyed into the bottles of alkaline solution 22. 25. should have been made to dip into the liquor, while the other tubes 23. and 26. which carry off the gas, ought to have been cut off some way above the surface of the liquor in the bottles.

A few explanatory notes are added; and indeed, from the perspicuity of the Author, very few were found necessary. In a very small number of places, the liberty has been taken of throwing to the bottom of the page, in notes, some parenthetical expressions, only relative to the subject, which, in their original place, tended to confuse the sense. These, and the original notes of the Author, are distinguished by the letter A, and to the few which the Translator has ventured to add, the letter E is subjoined.

Mr Lavoisier has added, in an Appendix, several very useful Tables for facilitating the calculations now necessary in the advanced state of modern chemistry, wherein the most scrupulous accuracy is required....