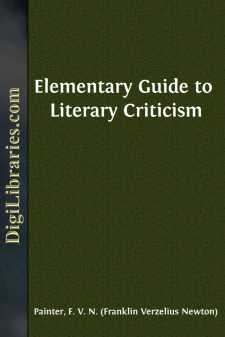 CHAPTER I NATURE AND OFFICE OF CRITICISM

1. Purpose of Literary Study. The study or reading of literature ordinarily has a threefold purpose,—knowledge, pleasure, and culture. This purpose shows us both the character of the literature which should be read and the manner in which it should be read. As a rule we should read only books of recognized excellence, and read them with sympathetic intelligence. Trashy books, whatever pleasure they may give, add but little to knowledge or culture; and immoral books often leave an ineradicable stain upon the soul. Fortunately there are good books enough to satisfy every taste and supply every need.

2. Necessity of Comprehending. A literary work cannot be of much use till it is understood. It is useless to read books entirely beyond our grasp. In the perusal of an author we should endeavor to enter as fully as possible into his thoughts and feelings. Our primary aim should be not to criticise but to comprehend. This is sometimes, especially for the young student, a difficult task. It requires patient, painstaking labor; but in the end it brings a rich reward in profit, enjoyment, and power.

In the study of a literary classic we should aim at more than a mere intellectual apprehension of its technique and other external features. The soul should rise into sympathy with it, and feel its spiritual beauty. All literary study that falls short of this high end, however scholarly or laborious it may be, is essentially defective. The externalities of a piece of literature are comprehended in vain, unless they lead to a fuller understanding and appreciation of its spirit and life. Unfortunately, at the present time, philology and literary analysis frequently stop short of the realization of the supreme end of literary study. What should be only a means is sometimes exalted to an end.

3. Definition of Criticism. Criticism, as its etymology indicates, is the act of judging. Literary criticism endeavors to form a correct estimate of literary productions. Its endeavor is to see a piece of writing as it is. It brings literary productions into comparison with recognized principles and ideal standards; it investigates them in their matter, form, and spirit; and, as a result of this process, it determines their merits and their defects. The end of literary criticism is not fault-finding but truth. The critic should be more than a censor or caviler. He should discover and make known whatever is commendable or excellent. At its best, criticism is not a mere record of general impressions but the statement of an intelligent judgment. It is not biased or vitiated by prejudice, ignorance, or self-interest; but, proceeding according to well-defined principles, it is able to trace the steps by which it reaches its ultimate conclusions.

4. History of Criticism. Criticism is a natural attendant of all forms of art. Literary criticism is almost as old as literature itself. No sooner had a writer produced a literary work, even in the most ancient times, than his contemporaries proceeded to express their judgments concerning it....