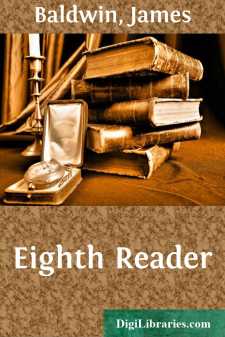 Tom was to arrive early in the afternoon, and there was another fluttering heart besides Maggie's when it was late enough for the sound of the gig wheels to be expected. For if Mrs. Tulliver had a strong feeling, it was fondness for her boy. At last the sound came—that quick light bowling of the gig wheels.

"There he is, my sweet lad!" Mrs. Tulliver stood with her arms open; Maggie jumped first on one leg and then on the other; while Tom descended from the gig, and said, with masculine reticence as to the tender emotions, "Hallo! Yap—what! are you there?"

Nevertheless he submitted to be kissed willingly enough, though Maggie hung on his neck in rather a strangling fashion, while his blue eyes wandered toward the croft and the lambs and the river, where he promised himself he would begin to fish the first thing to-morrow morning. He was one of those lads that grow everywhere in England, and at twelve or thirteen years of age look as much alike as goslings,—a lad with a physiognomy in which it seems impossible to discern anything but the generic character of boyhood.

"Maggie," said Tom, confidentially, taking her into a corner, as soon as his mother was gone out to examine his box, and the warm parlor had taken off the chill he had felt from the long drive, "you don't know what I've got in my pockets," nodding his head up and down as a means of rousing her sense of mystery.

"No," said Maggie. "How stodgy they look, Tom! Is it marbles or cobnuts?" Maggie's heart sank a little, because Tom always said it was "no good" playing with her at those games—she played so badly.

"Marbles! no; I've swopped all my marbles with the little fellows, and cobnuts are no fun, you silly, only when the nuts are green. But see here!" He drew something half out of his right-hand pocket.

"What is it?" said Maggie, in a whisper. "I can see nothing but a bit of yellow."

"Don't be a spitfire, else I won't tell you," said Tom, thrusting his hand back into his pocket, and looking determined.

"No, Tom," said Maggie, imploringly, laying hold of the arm that was held stiffly in the pocket. "I'm not cross, Tom; it was only because I can't bear guessing. Please be good to me."

Tom's arm slowly relaxed, and he said, "Well, then, it's a new fish line—two new ones—one for you, Maggie, all to yourself. I wouldn't go halves in the toffee and gingerbread on purpose to save the money; and Gibson and Spouncer fought with me because I wouldn't. And here's hooks; see here!—I say, won't we go and fish to-morrow down by the Round Pool? And you shall catch your own fish, Maggie, and put the worms on, and everything—won't it be fun?"

Maggie's answer was to throw her arms around Tom's neck and hug him, and hold her cheek against his without speaking, while he slowly unwound some of the line, saying, after a pause:—