Edison, His Life and Inventions 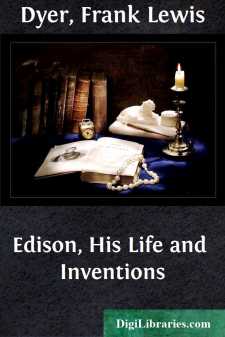 CHAPTER I THE AGE OF ELECTRICITY

THE year 1847 marked a period of great territorial acquisition by the American people, with incalculable additions to their actual and potential wealth. By the rational compromise with England in the dispute over the Oregon region, President Polk had secured during 1846, for undisturbed settlement, three hundred thousand square miles of forest, fertile land, and fisheries, including the whole fair Columbia Valley. Our active "policy of the Pacific" dated from that hour. With swift and clinching succession came the melodramatic Mexican War, and February, 1848, saw another vast territory south of Oregon and west of the Rocky Mountains added by treaty to the United States. Thus in about eighteen months there had been pieced into the national domain for quick development and exploitation a region as large as the entire Union of Thirteen States at the close of the War of Independence. Moreover, within its boundaries was embraced all the great American gold-field, just on the eve of discovery, for Marshall had detected the shining particles in the mill-race at the foot of the Sierra Nevada nine days before Mexico signed away her rights in California and in all the vague, remote hinterland facing Cathayward.

Equally momentous were the times in Europe, where the attempt to secure opportunities of expansion as well as larger liberty for the individual took quite different form. The old absolutist system of government was fast breaking up, and ancient thrones were tottering. The red lava of deep revolutionary fires oozed up through many glowing cracks in the political crust, and all the social strata were shaken. That the wild outbursts of insurrection midway in the fifth decade failed and died away was not surprising, for the superincumbent deposits of tradition and convention were thick. But the retrospect indicates that many reforms and political changes were accomplished, although the process involved the exile of not a few ardent spirits to America, to become leading statesmen, inventors, journalists, and financiers. In 1847, too, Russia began her tremendous march eastward into Central Asia, just as France was solidifying her first gains on the littoral of northern Africa. In England the fierce fervor of the Chartist movement, with its violent rhetoric as to the rights of man, was sobering down and passing pervasively into numerous practical schemes for social and political amelioration, constituting in their entirety a most profound change throughout every part of the national life.

Into such times Thomas Alva Edison was born, and his relations to them and to the events of the past sixty years are the subject of this narrative. Aside from the personal interest that attaches to the picturesque career, so typically American, there is a broader aspect in which the work of the "Franklin of the Nineteenth Century" touches the welfare and progress of the race. It is difficult at any time to determine the effect of any single invention, and the investigation becomes more difficult where inventions of the first class have been crowded upon each other in rapid and bewildering succession....