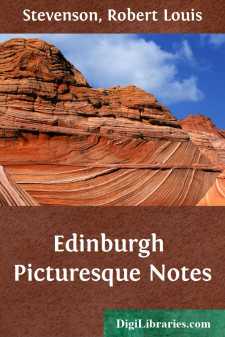 The ancient and famous metropolis of the North sits overlooking a windy estuary from the slope and summit of three hills.  No situation could be more commanding for the head city of a kingdom; none better chosen for noble prospects.  From her tall precipice and terraced gardens she looks far and wide on the sea and broad champaigns.  To the east you may catch at sunset the spark of the May lighthouse, where the Firth expands into the German Ocean; and away to the west, over all the carse of Stirling, you can see the first snows upon Ben Ledi.

But Edinburgh pays cruelly for her high seat in one of the vilest climates under heaven.  She is liable to be beaten upon by all the winds that blow, to be drenched with rain, to be buried in cold sea fogs out of the east, and powdered with the snow as it comes flying southward from the Highland hills.  The weather is raw and boisterous in winter, shifty and ungenial in summer, and a downright meteorological purgatory in the spring.  The delicate die early, and I, as a survivor, among bleak winds and plumping rain, have been sometimes tempted to envy them their fate.  For all who love shelter and the blessings of the sun, who hate dark weather and perpetual tilting against squalls, there could scarcely be found a more unhomely and harassing place of residence.  Many such aspire angrily after that Somewhere-else of the imagination, where all troubles are supposed to end.  They lean over the great bridge which joins the New Town with the Old—that windiest spot, or high altar, in this northern temple of the winds—and watch the trains smoking out from under them and vanishing into the tunnel on a voyage to brighter skies.  Happy the passengers who shake off the dust of Edinburgh, and have heard for the last time the cry of the east wind among her chimney-tops!  And yet the place establishes an interest in people’s hearts; go where they will, they find no city of the same distinction; go where they will, they take a pride in their old home.

Venice, it has been said, differs from another cities in the sentiment which she inspires.  The rest may have admirers; she only, a famous fair one, counts lovers in her train.  And, indeed, even by her kindest friends, Edinburgh is not considered in a similar sense.  These like her for many reasons, not any one of which is satisfactory in itself.  They like her whimsically, if you will, and somewhat as a virtuoso dotes upon his cabinet.  Her attraction is romantic in the narrowest meaning of the term.  Beautiful as she is, she is not so much beautiful as interesting.  She is pre-eminently Gothic, and all the more so since she has set herself off with some Greek airs, and erected classic temples on her crags.  In a word, and above all, she is a curiosity.  The Palace of Holyrood has been left aside in the growth of Edinburgh, and stands grey and silent in a workman’s quarter and among breweries and gas works.  It is a house of many memories.  Great people of yore, kings and queens, buffoons and grave ambassadors, played their stately farce for centuries in Holyrood.  Wars have been plotted, dancing has lasted deep into the night,—murder has been done in its chambers.  There Prince Charlie held his phantom levees, and in a very gallant manner represented a fallen dynasty for some hours.  Now, all these things of clay are mingled with the dust, the king’s crown itself is shown for sixpence to the vulgar; but the stone palace has outlived these charges.  For fifty weeks together, it is no more than a show for tourists and a museum of old furniture; but on the fifty-first, behold the palace reawakened and mimicking its past.  The Lord Commissioner, a kind of stage sovereign, sits among stage courtiers; a coach and six and clattering escort come and go before the gate; at night, the windows are lighted up, and its near neighbours, the workmen, may dance in their own houses to the palace music.  And in this the palace is typical.  There is a spark among the embers; from time to time the old volcano smokes.  Edinburgh has but partly abdicated, and still wears, in parody, her metropolitan trappings.  Half a capital and half a country town, the whole city leads a double existence; it has long trances of the one and flashes of the other; like the king of the Black Isles, it is half alive and half a monumental marble.  There are armed men and cannon in the citadel overhead; you may see the troops marshalled on the high parade; and at night after the early winter even-fall, and in the morning before the laggard winter dawn, the wind carries abroad over Edinburgh the sound of drums and bugles.  Grave judges sit bewigged in what was once the scene of imperial deliberations.  Close by in the High Street perhaps the trumpets may sound about the stroke of noon; and you see a troop of citizens in tawdry masquerade; tabard above, heather-mixture trowser below, and the men themselves trudging in the mud among unsympathetic by-standers.  The grooms of a well-appointed circus tread the streets with a better presence.  And yet these are the Heralds and Pursuivants of Scotland, who are about to proclaim a new law of the United Kingdom before two-score boys, and thieves, and hackney-coachmen.  Meanwhile every hour the bell of the University rings out over the hum of the streets, and every hour a double tide of students, coming and going, fills the deep archways.  And lastly, one night in the springtime—or say one morning rather, at the peep of day—late folk may hear voices of many men singing a psalm in unison from a church on one side of the old High Street; and a little after, or perhaps a little before, the sound of many men singing a psalm in unison from another church on the opposite side of the way.  There will be something in the words above the dew of Hermon, and how goodly it is to see brethren dwelling together in unity.  And the late folk will tell themselves that all this singing denotes the conclusion of two yearly ecclesiastical parliaments—the parliaments of Churches which are brothers in many admirable virtues, but not specially like brothers in this particular of a tolerant and peaceful life....