Eben Holden, a tale of the north country 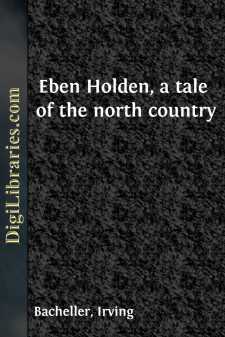 Early in the last century the hardy wood-choppers began to come west, out of Vermont. They founded their homes in the Adirondack wildernesses and cleared their rough acres with the axe and the charcoal pit. After years of toil in a rigorous climate they left their sons little besides a stumpy farm and a coon-skin overcoat. Far from the centres of life their amusements, their humours, their religion, their folk lore, their views of things had in them the flavour of the timber lands, the simplicity of childhood. Every son was nurtured in the love of honour and of industry, and the hope of sometime being president. It is to be feared this latter thing and the love of right living, for its own sake, were more in their thoughts than the immortal crown that had been the inspiration of their fathers. Leaving the farm for the more promising life of the big city they were as men born anew, and their second infancy was like that of Hercules. They had the strength of manhood, the tireless energy of children and some hope of the highest things. The pageant of the big town—its novelty, its promise, its art, its activity—quickened their highest powers, put them to their best effort. And in all great enterprises they became the pathfinders, like their fathers in the primeval forest.

This book has grown out of such enforced leisure as one may find in a busy life. Chapters begun in the publicity of a Pullman car have been finished in the cheerless solitude of a hotel chamber. Some have had their beginning in a sleepless night and their end in a day of bronchitis. A certain pious farmer in the north country when, like Agricola, he was about to die, requested the doubtful glory of this epitaph: 'He was a poor sinner, but he done his best' Save for the fact that I am an excellent sinner, in a literary sense, the words may stand for all the apology I have to make.

The characters were mostly men and women I have known and who left with me a love of my kind that even a wide experience with knavery and misfortune has never dissipated. For my knowledge of Mr Greeley I am chiefly indebted to David P. Rhoades, his publisher, to Philip Fitzpatrick, his pressman, to the files of the Tribune and to many books.

BOOK ONE Chapter I

Of all the people that ever went west that expedition was the most remarkable.

A small boy in a big basket on the back of a jolly old man, who carried a cane in one hand, a rifle in the other; a black dog serving as scout, skirmisher and rear guard—that was the size of it. They were the survivors of a ruined home in the north of Vermont, and were travelling far into the valley of the St Lawrence, but with no particular destination.

Midsummer had passed them in their journey; their clothes were covered with dust; their faces browning in the hot sun. It was a very small boy that sat inside the basket and clung to the rim, his tow head shaking as the old man walked. He saw wonderful things, day after day, looking down at the green fields or peering into the gloomy reaches of the wood; and he talked about them....