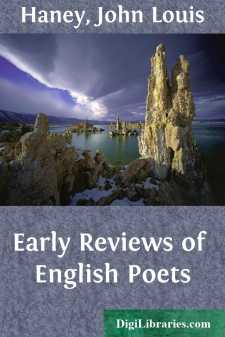 To the modern reader, with an abundance of periodicals of all sorts and upon all subjects at hand, it seems hardly possible that this wealth of ephemeral literature was virtually developed within the past two centuries. It offers such a rational means for the dissemination of the latest scientific and literary news that the mind undeceived by facts would naturally place the origin of the periodical near the invention of printing itself. Apart from certain sporadic manifestations of what is termed, by courtesy, periodical literature, the real beginning of that important department of letters was in the innumerable Mercurii that flourished in London after the outbreak of the Civil War. Although the British Museum Catalogue presents a long list of these curious messengers and news-carriers, the only one that could be of interest in the present connection is the Mercurius Librarius; or a Catalogue of Books Printed and Published at London (1668-70), the contents of which simply fulfilled the promise of its title.

Literary journals in England were, however, not a native development, but were copied, like the fashions and artistic norms of that period, from the French. The famous and long-lived Journal des Sçavans was begun at Paris in 1665 by M. Denis de Sallo, who has been called, since the time of Voltaire, the "inventor" of literary journals. In 1684 Pierre Bayle began at Amsterdam the publication of Nouvelles de la République des Lettres, which continued under various hands until 1718. These French periodicals were the acknowledged inspiration for similar ventures in England, beginning in 1682 with the Weekly Memorial for the Ingenious: or an Account of Books lately set forth in Several Languages, with some other Curious Novelties relating to Arts and Sciences. The preface stated the intention of the publishers to notice foreign as well as domestic works, and to transcribe the "curious novelties" from the Journal des Sçavans. Fifty weekly numbers appeared (1682-83), consisting principally of translations of the best articles in the French journal.

A few years later (1686), the Genevan theologian, Jean Le Clerc, then a resident of London, established the Universal Historical Bibliothèque; or, an Account of most of the Considerable Books printed in All Languages, which was continued by various hands until 1693 in a series of twenty-five quarto volumes. Contemporary with this review was a number of similar publications which had for the most part a brief existence. Among them was the Athenian Mercury, published on Tuesdays and Saturdays (1691-1696), the History of Learning, which appeared for a short time in 1691 and again in 1694; Works of the Learned (1691-92); the Young Student's Library (1692) and its continuation, the Compleat Library (1692-94); Memoirs for the Ingenious (1693); the Universal Mercury (1694) and Miscellaneous Letters, etc. (1694-96). Samuel Parkes includes among the reviews of this period Sir Thomas Pope Blount's remarkable Censura Celebrium Authorum (1690)....