Duncan Polite The Watchman of Glenoro 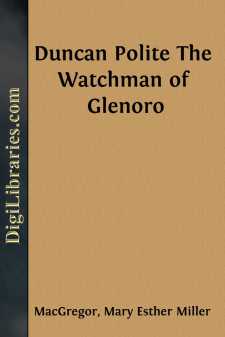 The morning sun was growing stronger as it rose higher. Collie, returning from driving his master's cow to the cool shade of the back pasture, felt its rays penetrate his shaggy coat. His tongue hung out as he padded swiftly up the garden path where already the dew was almost dried from the rows of marigolds and sweet William. He dropped with a sigh in the shadow of the old water-barrel that stood against the house. He felt too warm even to chase his enemy, the cat, into her accustomed shelter of the adjacent pine tree, though she was curled up with impudent complacence upon the top of the barrel. Instead, he lay in the shade, his eyes glancing furtively through the open door. He could see inside the old log shanty, where a figure was moving about the bare, spotless kitchen; his tail began to thump a welcome upon the ground, as the figure came slowly forward and stood in the doorway. It was an old man, tall and stooped, with a finely built frame which suggested a less rugged constitution than is the possession of the average pioneer. His face was handsome, with regular, clearly cut features and a pair of wonderful eyes, dark and deep set, with a wealth of kindness in their brown depths and a mysterious pathos which spoke of a poetic soul beneath.

Duncan Polite, the people of the neighbourhood called him, partly because the name was descriptive of his gentle, courteous nature, and partly because, among the many McDonalds of these Canadian Highlands, to which clan he belonged, names were so often repeated that the only appellation of any use to a man was the special and distinguishing one, complimentary or otherwise, bestowed upon him by his neighbours. Indeed, such was the dearth of original names that it is on record that old Ian McAllister, the first schoolmaster in the McDonald settlement, was often compelled as he flung his tawse across the room at some focussed point of mischief behind the stove, to pause even at the boiling-point of his wrath, to deliver himself of some such explanation of the case as:

"Fiddlin' Archie's Archie, an' Squintin' Archie's Duncan, an' you, Black Sandy More, come up here or Ah'll smash every curse o' a McDonald in the school!"

But among all the McDonalds there was only one whose character demanded such a title as belonged to Duncan Polite. He stood for a moment this morning, in his doorway, gazing over the sun-bathed fields, all green and gold in their early summer dress, then went back into the room, returning the next moment carrying an old leather-bound Bible. He spread his big red handkerchief upon the doorstep to protect his Sabbath clothes from possible contact with dust, and seated himself upon it, the open Book on his knee.

Everything in his little bachelor domain was in perfect order; the path to the gate, with its bright border of flowers, was swept as clean as the spotless floor within the log shanty; the old stove in the centre of the kitchen, the big, high cupboard with its rows of shining dishes, the old clock ticking in a solemn muffled tone from its place on the dresser, and the bare pine table were all in a condition of beautiful dazzling cleanliness....