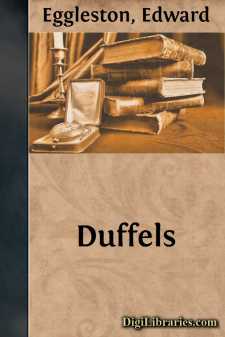 Two weather-beaten stone buildings at Ephrata, in Pennsylvania, remain as monuments on this side of the water of the great pietistic movement in Germany in the early part of the eighteenth century. One of these was called Bethany, the other Sharon. A hundred and thirty or forty years ago there were other buildings with these, and the softening hand of time had not yet touched any of them. The doorways were then, as now, on the ground level, the passages were just as narrow and dusky, the cells had the same little square windows to let in the day. But the stones in that day had a hue that reminded one of the quarry, the mortar between them was fresh, the shingles in the roof had gathered no moss and very little weather stain; the primeval forests were yet within the horizon, and there was everywhere an air of newness, of advancement, and of prosperity about the Dunkard Convent. One sees now neither monks nor nuns in these narrow hallways; monks and nuns are nowhere about Ephrata, except in the graveyard where all the brethren of Bethany, and all the sisters who once peopled Sharon, sleep together in the mold. But in the middle of the eighteenth century their bare feet shuffled upon the stairs as, clad in white hooded cloaks descending to the very ground, they glided in and out of the low doors, or assembled in the little chapel called "Zion" to attend service under the lead of their founder, Conrad Beissels. In the convent, where he reigned supreme, Beissels was known as Brother Friedsam; later he was reverently called Father Friedsam Gottrecht, a name that, like all their convent names, had plenty of mystical significance attached to it.

But monks and nuns are men and women; and neither cloister life, nor capuchin hoods and cloaks, nor bare feet, nor protracted midnight services, can prevent heartburnings and rivalries, nor can all of these together put down—what is most to be dreaded in a monastery—the growth of affection between man and woman. What could be done to tame human nature into submission, to bring it to rejoice only in unearthly meditations, and a contented round of self-denial and psalm-singing, Brother Friedsam had tried on his followers with the unsparing hand of a religious enthusiast. He had forbidden all animal food. Not only was meat of evil tendency, but milk, he said, made the spirit heavy and narrow; butter and cheese produced similar disabilities; eggs excited the passions; honey made the eyes bright and the heart cheerful, but did not clear the voice for music. So he approved chiefly of those plain things that sprang direct from the earth, particularly of potatoes, turnips, and other roots, with a little bread soup and such like ghostly diet. For drink he would have nothing but what he called "innocent clear water," just as it flowed from the spring.

But even a dish of potatoes and turnips and beets and carrots, eaten from wooden trenchers, without milk or butter or meat, was not sufficient to make the affections and passions of men and women as ethereal as Friedsam wished....