Draw Swords! In the Horse Artillery 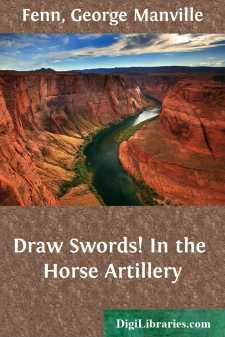 A Feather in his Cap.

“I shall cut the service. It’s rank favouritism.”

“I shall write home and tell my father to get the thing shown up in the House of Commons.”

Richard Darrell, a well-grown boy of seventeen, pretty well tanned by the sun of India, stood flashed with annoyance, looking sharply from one speaker to another as he stood in the broad veranda of the officers’ quarters in the Roumwallah Cantonments in the northern portion of the Bengal Presidency, the headquarters of the artillery belonging to the Honourable the East India Company, commonly personified as “John Company of Leadenhall Street.” It was over sixty years ago, in the days when, after a careful training at the Company’s college near Croydon, young men, or, to be more correct, boys who had made their marks, received their commission, and were sent out to join the batteries of artillery, by whose means more than anything else the Company had by slow degrees conquered and held the greater part of the vast country now fully added to the empire and ruled over by the Queen.

It was a common affair then for a lad who had been a schoolboy of sixteen, going on with his studies one day, to find himself the next, as it were, a commissioned officer, ready to start for the East, to take his position in a regiment and lead stalwart men, either in the artillery or one of the native regiments; though, of course, a great deal of the college training had been of a military stamp.

This was Richard Darrell’s position one fine autumn morning a year previous to the opening of this narrative. He had bidden farewell to father, mother, and Old England, promised to do his duty like a man, and sailed for Calcutta, joined his battery, served steadily in it for a year, and now stood in his quiet artillery undress uniform in that veranda, looking like a strange dog being bayed at by an angry pack.

The pack consisted of young officers of his own age and under. There was not a bit of whisker to be seen; and as to moustache, not a lad could show half as much as Dick, while his wouldn’t have made a respectable eyebrow for a little girl of four.

Dick was flushed with pleasurable excitement, doubly flushed with anger; but he kept his temper down, and let his companions bully and hector and fume till they were tired.

Then he gave an important-looking blue letter he held a bit of a wave, and said, “It’s no use to be jealous.”

“Pooh! Who’s jealous—and of you?” said the smallest boy present, one who had very high heels to his boots. “That’s too good.”

“For, as to being a favourite with the general, he has never taken the slightest notice of me since I joined.”

“There, that’ll do,” said one of the party; “a man can’t help feeling disappointment. Every one is sure to feel so except the one who gets the stroke of luck....