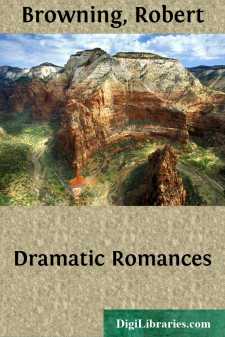 [The Dramatic Romances,...] enriched by some of the poems originally printed in Men and Women, and a few from Dramatic Lyrics as first printed, include some of Browning's finest and most characteristic work. In several of them the poet displays his familiarity with the life and spirit of the Renaissance—a period portrayed by him with a fidelity more real than history—for he enters into the feelings that give rise to action, while the historian is busied only with the results growing out of the moving force of feeling.

The egotism of the Ferrara husband outraged at the gentle wife because she is as gracious toward those who rendered her small courtesies, and seemed as thankful to them as she was to him for his gift of a nine-hundred-years-old name, opens up for inspection the heart of a husband at a time when men exercised complete control over their wives, and could satisfy their jealous, selfish instincts by any cruel methods they chose to adopt, with no one to say them "nay." The highly developed artistic sense shown by this husband is not incompatible with his consummate selfishness and cruelty, as many tales of that time might be brought forward to illustrate. The husband in "The Statue and the Bust" belongs to the same type, and the situation there is the inevitable outcome of a civilization in which women were not consulted as to whom they would marry, and naturally often fell a prey to love if it should come to them afterwards. Weakness of will in the case of the lovers in this poem wrecked their lives; for they were not strong enough to follow either duty or love. Another glimpse is caught of this period when husbands and brothers and fathers meted out what they considered justice to the women in "In a Gondola." "The Grammarian's Funeral" gives also an aspect of Renaissance life—the fervor for learning characteristic of the earlier days of the Renaissance when devoted pedants, as Arthur Symons says in referring to this poem, broke ground in the restoration to the modern world of the civilization and learning of ancient Greece and Rome. Again, "The Heretic's Tragedy" and "Holy-Cross Day" picture most vividly the methods resorted to by the dying church in its attempts to keep control of the souls of a humanity seething toward religious tolerance.

With only a small space at command, it is difficult to decide on the poems to be touched upon, especially where there is not one but would repay prolonged attention, due no less to the romantic interest of the stories, the marvellous penetration into human motives, the grasp of historical atmospheres, than to the originality and perfection of their artistry.

A word must be said of "The Flight of the Duchess" and "Childe Roland to the Dark Tower Came," both poems which have been productive of many commentaries, and both holding their own amid the bray [sic] of critics as unique and beautiful specimens of poetic art. Certainly no two poems could be chosen to show wider diversity in the poet's genius than these....