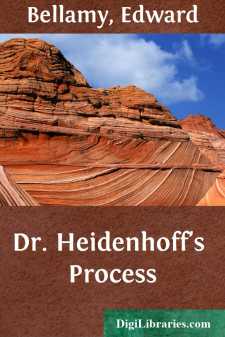 The hand of the clock fastened up on the white wall of the conference room, just over the framed card bearing the words "Stand up for Jesus," and between two other similar cards, respectively bearing the sentences "Come unto Me," and "The Wonderful, the Counsellor," pointed to ten minutes of nine. As was usual at this period of Newville prayer-meetings, a prolonged pause had supervened. The regular standbyes had all taken their usual part, and for any one to speak or pray would have been about as irregular as for one of the regulars to fail in doing so. For the attendants at Newville prayer-meetings were strictly divided into the two classes of speakers and listeners, and, except during revivals or times of special interest, the distinction was scrupulously observed.

Deacon Tuttle had spoken and prayed, Deacon Miller had prayed and spoken, Brother Hunt had amplified a point in last Sunday's sermon, Brother Taylor had called attention to a recent death in the village as a warning to sinners, and Sister Morris had prayed twice, the second time it must be admitted, with a certain perceptible petulance of tone, as if willing to have it understood that she was doing more than ought to be expected of her. But while it was extremely improbable that any others of the twenty or thirty persons assembled would feel called on to break the silence, though it stretched to the crack of doom, yet, on the other hand, to close the meeting before the mill bell had struck nine would have been regarded as a dangerous innovation. Accordingly, it only remained to wait in decorous silence during the remaining ten minutes.

The clock ticked on with that judicial intonation characteristic of time-pieces that measure sacred time and wasted opportunities. At intervals the pastor, with an innocent affectation of having just observed the silence, would remark: "There is yet opportunity. . . . . Time is passing, brethren. . . . . Any brother or sister. . . . . We shall be glad to hear from any one." Farmer Bragg, tired with his day's hoeing, snored quietly in the corner of a seat. Mrs. Parker dropped a hymn-book. Little Tommy Blake, who had fallen over while napping and hit his nose, snivelled under his breath. Madeline Brand, as she sat at the melodeon below the minister's desk, stifled a small yawn with her pretty fingers. A June bug boomed through the open window and circled around Deacon Tuttle's head, affecting that good man with the solicitude characteristic of bald-headed persons when buzzing things are about. Next it made a dive at Madeline, attracted, perhaps, by her shining eyes, and the little gesture of panic with which she evaded it was the prettiest thing in the world; at least, so it seemed to Henry Burr, a broad-shouldered young fellow on the back seat, whose strong, serious face is just now lit up by a pleasant smile.

Mr. Lewis, the minister, being seated directly under the clock, cannot see it without turning around, wherein the audience has an advantage of him, which it makes full use of. Indeed, so closely is the general attention concentrated upon the time-piece, that a stranger might draw the mistaken inference that this was the object for whose worship the little company had gathered. Finally, making a slight concession of etiquette to curiosity, Mr. Lewis turns and looks up at the clock, and, again facing the people, observes, with the air of communicating a piece of intelligence, "There are yet a few moments."

In fact, and not to put too fine a point upon it, there are five minutes left, and the young men on the back seats, who attend prayer-meetings to go home with the girls, are experiencing increasing qualms of alternate hope and fear as the moment draws near when they shall put their fortune to the test, and win or lose it all....