Down the Rhine Young America in Germany 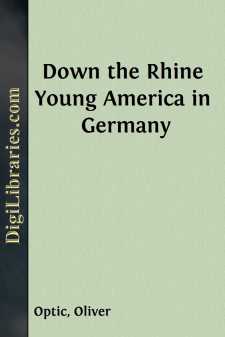 CONFUSION IN THE SHIP.

"All hands pipe to muster, ahoy!" screamed the new boatswain of the Young America, as he walked towards the forecastle of the ship, occasionally sounding a shrill blast upon his whistle.

At the same time the corresponding officer in the Josephine performed a similar service; and in a moment every officer and seaman in both vessels had taken his station. The squadron lay at anchor off the harbor of Havre. The students had returned the day before from a delightful tour through France and Switzerland—all except the thirty-one who had preferred to take a cruise on their own account in the Josephine; and these had been performing ship's duty, and making up back lessons, while the vessel lay at anchor in the port of Brest. Perhaps it was not strictly true that these malcontents were sick of the game of running away, but it is strictly true that they were disgusted with the penalty which had been imposed upon them by the authorities of the Academy. It is to be regretted that they were not moved to penitence by their punishment, and that they were ripe for any new rebellion which promised to be even a partial success. They had been deprived of seeing Paris,—which is France,—and the beautiful scenery of Switzerland, by their folly; and they had taste enough to realize that they had sacrificed the best part of a tour in Europe.

Those who had participated in the excursion were enthusiastic in their belief that they had had a good time; and the frequent discussion of the pleasures of the trip did not tend to diminish the discontent of the runaways. It was absolutely intolerable to think they had been compensating for past deficiencies in their studies, while their shipmates were gazing upon the magnificent palaces of Paris, the picturesque cottages, and the sublime mountain scenery of Switzerland. Perhaps their temper was not improved by the reflection that others had been permitted to enjoy what they were not allowed to see, for envy is one of the ugliest and most uncomfortable of human passions. Boys, like men and women, fret because they cannot have what others possess, either as the gift of partial Fortune, or as the reward of their own superior skill and perseverance.

If the runaways had not learned wisdom from their failure, they had acquired discretion. The leaders in the mad scheme could now see just why and wherefore they had failed; and they believed—if they were to have the opportunity to do the deed over again—they could make a success of it. The machinery of the secret organization was now disgusting to them, though it had enabled them to make the capture of the vessel. They were disposed to cast it all aside, and resort to new methods for future occasions. As a general rule, they were wise enough to keep still, and only among themselves did they express their chagrin and disappointment, or suggest that they were not entirely cured of their tendency to run away. The strict discipline of the squadron could not be evaded, and they were compelled to perform all their duties....