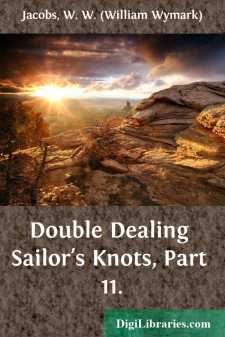 Mr. Fred Carter stood on the spacious common, inhaling with all the joy of the holiday-making Londoner the salt smell of the sea below, and regarding with some interest the movements of a couple of men who had come to a stop a short distance away. As he looked they came on again, eying him closely as they approached—a strongly built, shambling man of fifty, and a younger man, evidently his son.

"Good-evening," said the former, as they came abreast of Mr. Carter.

"That's him," said both together.

They stood regarding him in a fashion unmistakably hostile. Mr. Carter, with an uneasy smile, awaited developments.

"What have you got to say for yourself?" demanded the elder man, at last. "Do you call yourself a man?"

"I don't call myself anything," said the puzzled Mr. Carter. "Perhaps you're mistaking me for somebody else."

"He can say what he likes," said the other, "but we've got him now. If he gets away from me he'll be cleverer than what he thinks he is."

"What are we to do with him now we've got him?" inquired his son.

The elder man clenched a huge fist and eyed Mr. Carter savagely. "If I was just considering myself," he said, "I should hammer him till I was tired and then chuck him into the sea."

His son nodded. "That wouldn't do Nancy much good, though," he remarked.

"I want to do everything for the best," said the other, "and I s'pose the right and proper thing to do is to take him by the scruff of his neck and run him along to Nancy."

The other growled, and was about to aim a blow at him when his son threw himself upon him and besought him to be calm.

"Just one," said his father, struggling, "only one. It would do me good; and perhaps he'd come along the quieter for it."

"Look here!" said Mr. Carter. "You're mistaking me for somebody else, that's what you are doing. What am I supposed to have done?"

"You're supposed to have come courting my daughter, Mr. Somebody Else," said the other, re-leasing himself and thrusting his face into Mr. Carter's, "and, after getting her promise to marry you, nipping off to London to arrange for the wedding. She's been mourning over you for four years now, having an idea that you had been made away with."

"Being true to your memory, you skunk," said the son.

"And won't look at decent chaps that want to marry her," added the other.

"It's all a mistake," said Mr. Carter. "I came down here this morning for the first time in my life."

"Bring him along," said the son, impatiently. "It's a waste of time talking to him."

Mr. Carter took a step back and parleyed. "I'll come along with you of my own free will," he said, hastily, "just to show you that you are wrong; but I won't be forced."

He turned and walked back with them towards the town, pausing occasionally to admire the view. Once he paused so long that an ominous growl arose from the elder of his captors....