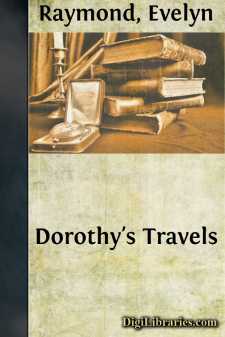 CHAPTER I SAILING DOWN THE HUDSON

The stentorian shout of the colored steward, so close to Dorothy’s ear, made her jump aside with a little scream. Then as she saw that the boat hands were about to draw the gang plank back to the steamer’s deck, she gave another little cry and fairly pushed Alfaretta toward it.

“Never mind hugging me now, girlie, you must go or you’ll be left!”

But the lassie from the mountain only smiled and answered:

“I don’t mind if I am. Look a-here!” and with that she pulled a shabby purse from the front of her blouse and triumphantly displayed its contents.

But Dorothy had no further time to waste in argument. Here were Jim Barlow and Monty Stark shaking either hand and bidding a hasty good-by, while Molly Breckenridge was fairly dancing up and down in her anxiety lest the lads should also be left on board, as Alfaretta was likely to be.

But they were not. Another second they had bounded down the stairs from the saloon to the lower deck, a workman had obligingly caught Monty by his coat collar and laughingly flung him over the plank to the dock beyond, while Jim’s long legs strode after and made their last leap across a little chasm of water.

Handkerchiefs waved, kisses were tossed across the widening water, the bell rang, the whistle tooted, and Dorothy’s travels had begun. Then as the group of schoolmates watching this departure from the shore grew more indistinct she turned upon her old mountain friend with the astonished question:

“But Alfaretta! Whatever made you do this? What will become of you, alone in that great city of New York?”

“I didn’t say anything about Ne’ York, did I? Should think you’d be glad to have me go along with you a little bit o’ way. Course, I shall get off the boat when it stops to Cornwall landing. And I thought—I thought—Seems if I couldn’t have you go so far away, Dolly. It’s terrible lonesome up-mounting now-a-days. And I—I don’t see why some folks has everything and some hasn’t nothin’!”

There was more grief than grammar in this speech and a few tears sprang to the girl’s eyes. But Alfy boasted that she was not a “crier” and as she heard the stewardess announcing: “Tickets, ladies and gentlemen,” she dashed the moisture away and stared at the woman.

After her usual custom, “Fanny” was collecting money from the various passengers and would obligingly procure their tickets for those not already provided. As she made her way through the throng, which on that summer morning crowded the upper deck of the pretty “Mary Powell,” the three young friends watched her with surprised interest.

Apparently she took no note of the amount anybody gave her, carrying bills of all dimensions between her fingers and piles of specie on her broad palm.

“How can she tell how much she’s taken from anybody? How can she give them their right change?” wondered Dorothy.

“I give it up! She must be a deal better at arithmetic than I am. I should make the mixedest mess of that business;” answered Molly, equally curious.

“Yet you will see that she makes no mistakes. I’ve been traveling up and down the river on this same boat for many years and I’ve given her all sorts of sums, at times, on purpose to try her. But her memory never fails,” said Miss Greatorex who was in charge of the party. She sat quite calmly with the amount of three fares in her hand but with a most forbidding gaze at Alfaretta.

Who that young person was or why she had thrust herself into their company she did not understand. She had herself but known of this trip on the day before, when Miss Penelope Rhinelander had been obliged to give it up, on account of the extreme illness of a near relative.

However, here she was with her two pupils, whom she taught at the Rhinelander Academy, bound for a summer’s outing in—to her and them—unknown lands....