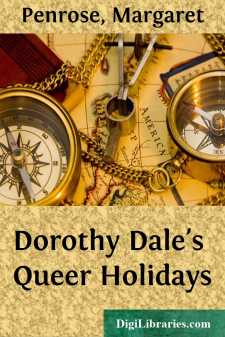 CHAPTER I THE SAME OLD TAVIA

"She very probably will miss her train, we will miss her at the station, she will take a ride up with old Bill Mason, stay talking to him until dinner is too cold to wait any longer; then—then—well, she may steal in through a window and give you a midnight scare, just for a joke. That's my recollection of Miss Tavia."

"Nat, you're too mean—Tavia is not always late, and she doesn't purposely upset plans. Some things can't be prevented."

"Right, little coz, they can't. That's right. Tavia is one of the things that can't be prevented from——"

"Quit! quit there! Easy with young ladies' names! You don't have to—to put her up for the registry," and the last speaker swung around in mock challenge, with his fist very close to his brother's aristocratic nose.

The three were Dorothy, Ned and Nat. Dorothy Dale was the "coz," a very pretty and attractive young girl, while her two good-looking cousins, Ned the elder and Nat the jollier, were sons of Mrs. Winthrop White, of North Birchland.

Dorothy, with her father, Major Dale, and her two brothers, Joe and Roger, the latter about two years younger than his brother, who was not yet in his 'teens, made her home with Major Dale's sister, Mrs. White, where they had lived for the past few years. It was now holiday time, and Dorothy was awaiting the arrival of her chum, Tavia Travers, of Dalton, the former home of the Dales.

We may say Dorothy was waiting, but the boys were—well, they may have had to wait until Miss Tavia got there, but one of them, Nat, evidently did not find "waiting" very pleasant employment. The fact was, Tavia was a very good friend of Nat, and because of this his brother enjoyed teasing Dorothy about her chum's shortcomings, especially when Nat was within hearing.

"Neddie, I've warned you——" and Nat "squared off" in a threatening manner.

"Boys! boys!" pleaded Dorothy, stepping in between them with her hands raised to prevent possible trouble.

"Well, if you insist," said Nat, with a very gallant bow. "In deference to a lady's presence I will not exterminate the—the bug."

"Yes, I said bug," repeated his brother. "They are such—such unpleasant things to have to exterminate."

The two boys had now assumed attitudes generally supposed to be the very best possible in preparation for a fistic encounter, and Dorothy had just jumped upon a chair to be able to reach her taller cousin and prevent anything serious happening, when a very gentle voice from the doorway interrupted the little scene.

Instantly the trio turned toward this beautiful woman, for she was beautiful indeed.

So stately, so tall, so queenly, and gowned in such a simple yet attractive house robe. Youth may have its glories, but surely mature womanhood has its compensations, for a queenly woman, in the ease and luxury of home costume, is to the eye of love and to the eyes of discriminating persons the most beautiful of all the pictures that femininity is capable of inspiring.

Mrs. White's Christian name was Ruth, but the Dale children, having another aunt of that name, had always called this one Aunt Winnie, a sort of contraction from the name of Mrs. White's late husband—Winthrop.

This afternoon, when our story opens, was one of those tiresome "strips of time," with nothing to mark it as different from any other occasion, but, as Nat expressed it, "everything seemed to be hanging around, waiting for Christmas, like New York, on Sunday, waiting for Monday."

The little party were vainly trying to make themselves happy in the library, where every reasonable comfort and luxury surrounded them, for The Cedars, as this country estate was called, was a very beautiful place, its interior arrangements reflected not only ample means, but a display of the finely original and cultured taste for which Mrs....