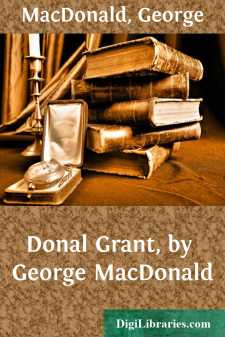 It was a lovely morning in the first of summer. Donal Grant was descending a path on a hillside to the valley below—a sheep-track of which he knew every winding as well as any boy his half-mile to and from school. But he had never before gone down the hill with the feeling that he was not about to go up again. He was on his way to pastures very new, and in the distance only negatively inviting. But his heart was too full to be troubled—nor was his a heart to harbour a care, the next thing to an evil spirit, though not quite so bad; for one care may drive out another, while one devil is sure to bring in another.

A great billowy waste of mountains lay beyond him, amongst which played the shadow at their games of hide and seek—graciously merry in the eyes of the happy man, but sadly solemn in the eyes of him in whose heart the dreary thoughts of the past are at a like game. Behind Donal lay a world of dreams into which he dared not turn and look, yet from which he could scarce avert his eyes.

He was nearing the foot of the hill when he stumbled and almost fell, but recovered himself with the agility of a mountaineer, and the unpleasant knowledge that the sole of one of his shoes was all but off. Never had he left home for college that his father had not made personal inspection of his shoes to see that they were fit for the journey, but on this departure they had been forgotten. He sat down and took off the failing equipment. It was too far gone to do anything temporary with it; and of discomforts a loose sole to one's shoe in walking is of the worst. The only thing was to take off the other shoe and both stockings and go barefoot. He tied all together with a piece of string, made them fast to his deerskin knapsack, and resumed his walk. The thing did not trouble him much. To have what we want is riches, but to be able to do without is power. To have shoes is a good thing; to be able to walk without them is a better. But it was long since Donal had walked barefoot, and he found his feet like his shoe, weaker in the sole than was pleasant.

"It's time," he said to himself, when he found he was stepping gingerly, "I ga'e my feet a turn at the auld accomplishment. It's a pity to grow nae so fit for onything suner nor ye need. I wad like to lie doon at last wi' hard soles!"

In every stream he came to he bathed his feet, and often on the way rested them, when otherwise able enough to go on. He had no certain goal, though he knew his direction, and was in no haste. He had confidence in God and in his own powers as the gift of God, and knew that wherever he went he needed not be hungry long, even should the little money in his pocket be spent. It is better to trust in work than in money: God never buys anything, and is for ever at work; but if any one trust in work, he has to learn that he must trust in nothing but strength—the self-existent, original strength only; and Donal Grant had long begun to learn that. The man has begun to be strong who knows that, separated from life essential, he is weakness itself, that, one with his origin, he will be of strength inexhaustible....