Dolly Reforming Herself A Comedy in Four Acts 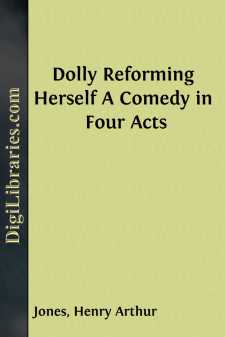 "The crescendo of quarrel is most skilfully and drolly arranged;— scene on classic lines boldly challenging and, what is more, maintaining comparison with Sheridan." Mr. A. B. Walkley—The London Times.

"This new play, by Mr. Henry Arthur Jones, at The Haymarket, is surely as good a comedy as he has ever written.

I should say, in evaluating Mr. Jones, that his greatest asset is his humor. We are grateful that Mr. Jones has that comfortable gift which prevents him from dancing on us—that gift of humor whereby he is content to take us just as we are.

No playwright is more joyously observant than Mr. Jones; and none observes more accurately, in the milieu that he has chosen. Other playwrights may create more salient and memorable figures. But none of them creates figures so lifelike as Mr. Jones.

Nor is any one of them so fine a craftsman. We are not made conscious of it while the play is in progress. From the very outset, we are aware merely of certain ladies and gentlemen behaving with apparent freedom and naturalness. It is only when the play is over that we notice the art of it. The verisimilitude of "Dolly Reforming Herself" is all the more admirable because the play is founded on a philosophic question, and in the whole course of it there is not a scene, not a character (not even the butler's character), that is not strictly and logically relevant to this question. The whole fabric is wrought in a tight and formal pattern, yet the effect of it is as life itself. The question in point is "Can we cure ourselves of our bad habits?" and the answer is worked not through a story, but simply through the behavior of a few people in a country-house.

The central scene of the play, however, is the scene between Dolly and her husband. The whole scene is delightful, worked out with the finest sense of dramatic rhythm: a truly great comic scene, of which Mr. Jones may well be proud."

Will you accept the dedication of this little comedy, whose success at the Haymarket was so largely due to your fine and sincere performance of Dolly?

The following is a copy of the original cast of "Dolly Reforming Herself" produced at the Haymarket Theatre, on Tuesday, November 3rd., 1908.