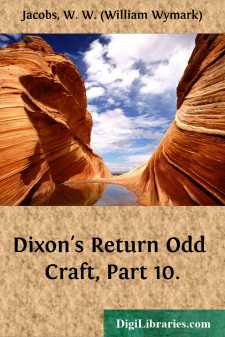 Talking about eddication, said the night-watchman, thoughtfully, the finest eddication you can give a lad is to send 'im to sea. School is all right up to a certain p'int, but arter that comes the sea. I've been there myself and I know wot I'm talking about. All that I am I owe to 'aving been to sea.

There's a saying that boys will be boys. That's all right till they go to sea, and then they 'ave to be men, and good men too. They get knocked about a bit, o' course, but that's all part o' the eddication, and when they get bigger they pass the eddication they've received on to other boys smaller than wot they are. Arter I'd been at sea a year I spent all my fust time ashore going round and looking for boys wot 'ad knocked me about afore I sailed, and there was only one out o' the whole lot that I wished I 'adn't found.

Most people, o' course, go to sea as boys or else not at all, but I mind one chap as was pretty near thirty years old when 'e started. It's a good many years ago now, and he was landlord of a public-'ouse as used to stand in Wapping, called the Blue Lion.

His mother, wot had 'ad the pub afore 'im, 'ad brought 'im up very quiet and genteel, and when she died 'e went and married a fine, handsome young woman who 'ad got her eye on the pub without thinking much about 'im. I got to know about it through knowing the servant that lived there. A nice, quiet gal she was, and there wasn't much went on that she didn't hear. I've known 'er to cry for hours with the ear-ache, pore gal.

Not caring much for 'er 'usband, and being spoiled by 'im into the bargain, Mrs. Dixon soon began to lead 'im a terrible life. She was always throwing his meekness and mildness up into 'is face, and arter they 'ad been married two or three years he was no more like the landlord o' that public-'ouse than I'm like a lord. Not so much. She used to get into such terrible tempers there was no doing anything with 'er, and for the sake o' peace and quietness he gave way to 'er till 'e got into the habit of it and couldn't break 'imself of it.

They 'adn't been married long afore she 'ad her cousin, Charlie Burge, come in as barman, and a month or two arter that 'is brother Bob, who 'ad been spending a lot o' time looking for work instead o' doing it, came too. They was so comfortable there that their father—a 'ouse-painter by trade—came round to see whether he couldn't paint the Blue Lion up a bit and make 'em look smart, so that they'd get more trade. He was one o' these 'ere fust-class 'ousepainters that can go to sleep on a ladder holding a brush in one hand and a pot o' paint in the other, and by the time he 'ad finished painting the 'ouse it was ready to be done all over agin.

I dare say that George Dixon—that was 'is name—wouldn't ha' minded so much if 'is wife 'ad only been civil, but instead o' that she used to make fun of 'im and order 'im about, and by-and-by the others began to try the same thing. As I said afore, Dixon was a very quiet man, and if there was ever anybody to be put outside Charlie or Bob used to do it....