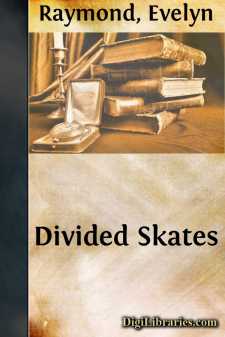 CHAPTER I. THE WAY IT BEGAN.

Nobody except Miss Lucy Armacost would have thought of starting an orphan asylum with one orphan. Even she might not have done it but for Molly Johns. As for Molly, she never dreamed of such a thing.

She was just careering down the avenue one windy afternoon in early December, upon one roller skate, and Miss Lucy was just coming up the block, walking rather unsteadily upon her two small feet. The dear little old lady was so tiny and so timid, and the wind so big and boisterous, that even without the accident she would have had difficulty in climbing the slope to her big house on the corner.

This was the way of it. Molly was making a reckless speed toward the bottom of the hill, swinging one arm to keep herself in balance, and now and then just touching the foot which wore no skate to the pavement; with the free hand she grasped the thin little fingers of a ragged boy, who also wore one skate, and forced him along beside her at her own rapid pace.

She was talking and laughing and singing, apparently all in one breath, just as she always was, and the thin little boy was doing his best to imitate her. Between them they made such a jolly racket that they heard nothing else, not even the trolley cars whizzing by, till Miss Lucy screamed:

Down they all went in a heap; and it was the first time in her life that Miss Lucy remembered to have made such an exhibition of herself.

“The idea!—of my falling flat in the public street! Oh! this is dreadful!”

Molly and the boy were up almost as quick as they were down, and each had an arm about the lady, while the girl’s tones were full of shame and sympathy.

“Oh! please forgive me! I am so sorry! I didn’t see you and he didn’t, and we were having such a good time. Are you hurt? Are you hurt very much? Shall I call a policeman? Would you like an ambulance? Are you the lady that lives in the house on the Avenue, the corner house with sixteen rooms and a garden and side yard, and——”

Miss Armacost was also upon her feet once more and had regained her self-possession. After one hasty glance around, she had satisfied herself that her mishap had not been observed by “the neighbors,” and her dignity had promptly returned.

“Whoever I may be, you are certainly the girl who asks questions!” she returned, rather crisply.

“Yes’m, I reckon I am. I’m Molly Johns. I live on Side Street. My house is the one runs right back of your garden. That’s the way I knew you. I often see you out around, pottering.”

“Oh! you do, do you? You are a very observing young person—at the wrong times.”

Molly opened her big gray eyes to their widest.

The little old lady was as odd as she looked, after all. Then she reflected that when people spoke in that tone of voice they were usually suffering in some manner. It was the very sound Father Johns’ speech had, whenever he came home from an especially hard day’s toil and his rheumatism bothered him. She again slipped her strong arm about Miss Lucy’s waist and remarked, anxiously:

“I do believe I did hurt you badly! Please lean on me and I’ll help you home in a jiffy. Then some of your ‘girls’ will take care of you.”

By “girls” Molly meant servants, of which there were at least three in the big corner house.

“Very well. The sooner we bring this episode to an end the better pleased I shall be,” answered the other. In reality, she had been more touched than she herself quite understood by the frank commiseration in Molly’s eyes, and she could not remember when anybody had clasped her body so affectionately. The sensation it gave her was an odd one; else a person so eminently correct and punctilious as Miss Armacost would never have walked the whole length of the finest block on the Avenue, and in full sight of her aristocratic neighbors’ windows, within the embrace of a girl from Side Street....