Distribution of Some Nebraskan Mammals 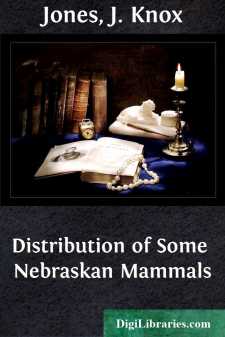 Because military service will interrupt my study of Nebraskan mammals, I am here placing on record certain information on the geographic distribution of several species—information that is thought pertinent to current studies of some of my associates. Most of this information is provided by specimens recently collected by me and other representatives of the University of Kansas Museum of Natural History, although specimens from other collections provide some of the records herein reported. The other collections are the Biological Surveys Collection of the United States National Museum (USBS), the Hastings Museum (HM), the Nebraska Game, Forestation and Parks Commission (NGFPC), the University of California Museum of Vertebrate Zoology (MVZ), the University of Michigan Museum of Zoology (MZ) and the University of Nebraska State Museum (NSM). Grateful acknowledgment hereby is made to persons in charge of these several collections for lending the materials concerned. Specimens mentioned in the following accounts are in the University of Kansas Museum of Natural History, except as otherwise stated. All measurements are in millimeters. Color terms are those of Ridgway (1912). A part of the funds for field work was made available by the National Science Foundation and the Kansas University Endowment Association.

Blarina brevicauda carolinensis (Bachman). Short-tailed Shrew.—J. S. Findley and I, in a forthcoming paper, review the distribution of Blarina brevicauda in the Great Plains region, recording B. b. carolinensis from the extreme southeastern and southwestern counties of Nebraska. A series of five shrews of this species recently obtained from three miles south and two miles east of Nebraska City in Otoe County, average significantly smaller in both the cranial and the external measurements than typical B. b. brevicauda and fall well within the range of carolinensis. Average and extreme external measurements of the four adults from Otoe County, three males and one female, are as follows: Total length, 110 (109-112); length of tail-vertebrae, 24.2 (22-26); length of hind foot, 13.8 (13-14). Another specimen from 3 mi. S, 1-1/2 mi. E of Peru, Nemaha County, also is referable to carolinensis. These recent records indicate that the range of B. b. carolinensis extends up the Missouri River Valley, approximately to Nebraska City, Otoe County. Five specimens from Louisville, Cass County, the next county northward, along the River, are referable to B. b. brevicauda.

Eptesicus fuscus fuscus. (Beauvois). Big Brown Bat.—One big brown bat was obtained on July 23, 1952, from one mile west of Niobrara, Knox County. While not so dark in dorsal coloration as some specimens of E. f. fuscus from eastern Nebraska (Cass and Sarpy counties), this specimen is noticeably darker than a series of E. f. pallidus from Ft. Niobrara Wildlife Refuge, 4 mi. E of Valentine, Cherry County, being near (16" j) Snuff Brown as opposed to near (16' i) Buckthorn Brown. Previous to the taking of this specimen, Webb and Jones (1952:277) reported as E. f. pallidus a specimen, saved as a skull only, which was picked up dead at Niobrara. It seems best to assign these two bats from the vicinity of Niobrara, Knox County, to E. f. fuscus.

Sciurus carolinensis carolinensis Gmelin. Gray Squirrel.—An adult male gray squirrel shot by Mr. Terry A. Vaughan in the heavily timbered bluffs of the Missouri River, 3 mi. S, 2 mi. E of Nebraska City, Otoe County, on October 10, 1953, provides the only museum specimen of a gray squirrel from Nebraska known to me. Residents in the area concerned report small numbers of this squirrel as still occurring on the heavily wooded bluffs along the Missouri River in Nemaha, Otoe and Richardson counties, Nebraska, at least as far north as Nebraska City....