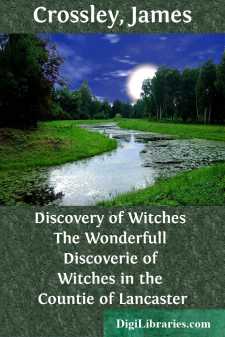 Add to My Favorites
Published: 9 years ago
Downloads: 115
Rating: (0 Votes)

Were not every chapter of the history of the human mind too precious an inheritance to be willingly relinquished,—for appalling as its contents may be, the value of the materials it may furnish may be inestimable,—we might otherwise be tempted to wish that the miserable record in which the excesses occasioned by the witch mania are narrated, could be struck out of its pages, and for ever cancelled. Most assuredly, he, who is content to take the fine exaggeration of the author of Hydriotaphia as a serious and literal truth, and who believes with him that "man is a glorious animal," must not go to the chapter which contains that record for his evidences and proofs. If he should be in search of materials for humiliation and abasement, he will find in the history of witchcraft in this country, from the beginning to the end of the seventeenth century, large and abundant materials, whether it affects the species or the individual. In truth, human nature is never seen in worse colours than in that dark and dismal review. Childhood, without any of its engaging properties, appears prematurely artful, wicked and cruel; woman, the victim of a wretched and debasing bigotry, has yet so little of the feminine adjuncts, that the fountains of our sympathies are almost closed; and man, tyrannizing over the sex he was bound to protect, in its helpless destitution and enfeebled decline, seems lost in prejudice and superstition and only strong in oppression. If we turn from the common herd to the luminaries of the age, to those whose works are the landmarks of literature and science, the reference is equally disappointing;—

We find the illustrious author of the Novum Organon sacrificing to courtly suppleness his philosophic truth, and gravely prescribing the ingredients for a witches' ointment;—Raleigh, adopting miserable fallacies at second hand, without subjecting them to the crucible of his acute and vigorous understanding;—Selden, maintaining that crimes of the imagination may be punished with death;—The detector of Vulgar Errors, and the most humane of physicians, giving the casting weight to the vacillating bigotry of Sir Matthew Hale;—Hobbes, ever sceptical, penetrating and sagacious, yet here paralyzed, and shrinking from the subject as if afraid to touch it;—The adventurous explorer, who sounded the depths and channels of the "Intellectual System" along all the "wide watered" shores of antiquity, running after witches to hear them recite the Common Prayer and the Creed, as a rational test of guilt or innocence;—The gentle spirit of Dr. Henry More, girding on the armour of persecution, and rousing itself from a Platonic reverie on the Divine Life, to assume the hood and cloak of a familiar of the Inquisition;—and the patient and enquiring Boyle, putting aside for a while his searches for the grand Magisterium, and listening, as if spell-bound, with gratified attention to stories of witches at Oxford, and devils at Mascon. Nor is it from a retrospect of our own intellectual progress only that we find how capricious, how intermitting, and how little privileged to great names or high intellects, or even to those minds which seemed to possess the very qualifications which would operate as conductors, are those illuminating gleams of common sense which shoot athwart the gloom, and aid a nation on its tardy progress to wisdom, humanity, and justice. If on the Continent there were, in the sixteenth century, two men from whom an exposure of the absurdities of the system of witchcraft might have been naturally and rationally expected, and who seem to stand out prominently from the crowd as predestined to that honourable and salutary office, those two men were John Bodin and Thomas Erastus. The former a lawyer—much exercised in the affairs of men—whose learning was not merely umbratic—whose knowledge of history was most philosophic and exact—of piercing penetration and sagacity—tolerant—liberal minded—disposed to take no proposition upon trust, but to canvass and examine every thing for himself, and who had large views of human nature and society—in fact, the Montesquieu of the seventeenth century....