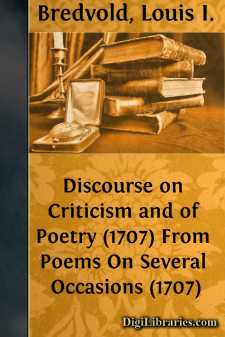 What little is known of the life of Samuel Cobb (1675-1713) may be found in the brief article in the Dictionary of National Biography by W.P. Courtney. He was born in London, and educated at Christ's Hospital and at Trinity College, Cambridge, where he obtained the degrees of B.A., 1698, and M.A., 1702. He was appointed "under grammar master" at Christ's Hospital in 1702 and continued his connection with this school until his early death. He had a reputation for wit and learning, and also for imbibing somewhat too freely. In his poetry he especially cultivated the style of the free Pindaric ode, a predilection which won him a mention without honor in Johnson's life of Pope (Lives of the Poets, ed. Birkbeck Hill, III, 227). Even the heroic couplets of his poem on "Poetry" aim rather at pseudo-Pindaric diffuseness than at epigrammatic concentration of statement. As a critic Cobb deserves attention in spite of his mediocrity, or even because of it. He helps to fill out the picture of the literary London of his time, and his opinions and tastes provide valuable side-lights on such greater men as Dennis, Addison, and Pope. "Of Poetry" belongs to the prolific literary type of "progress poems," in which the modern student finds illuminating statements as to how the eighteenth century surveyed and evaluated past literary traditions. The list of Cobb's publications in the Cambridge Bibliography suggests that he enjoyed some degree of popularity. His volume, Poems on Several Occasions, was published in 1707, and reprinted in enlarged form in 1709 and 1710. The reproduction herewith of the Preface "On Criticism" and the versified discourse "Of Poetry" is from a copy of the 1707 edition in the Newberry Library, in Chicago.

A DISCOURSE ON CRITICISM AND THE LIBERTY OF WRITING. In a Letter to Richard Carter Esq; late of the Middle-Temple, now living in Barbadoes.

The Muses are said to be the Daughters of Memory: A Poet therefore must lay down his Title to their Favour, who can be forgetful of a Friend, like You, whose polite Knowledge, instructive Conversation, and particulur Generosity to my self, have left such strong Impressions upon my Mind, as defy the Power of Absence to remove them. I scarce believe Death it self can blot out an Idea so firmly imprinted. The Soul, when it leaves this earthly Habitation, and has no more Use for those Vertues, which were serviceable in the Conduct of human Life, such as Temperance, Fortitude and the like, will certainly carry Love and Gratitude along with it to Heaven. This may suffice to let the World know what Obligations you have laid upon me.

By this Letter (the room of which, for your sake I could willingly have supply'd) you will plainly see, that no Place, however remote, is able to secure you from the Zeal of a Friend, and the Vanity of a Poet.

For tho' retiring to the Western Isles,At the long Distance of five thousand Miles,You've chang'd dear London for your Native Seat,And think Barbadoes is a safe Retreat;You highly err: Nor is the Wat'ry FenceSufficient Guard against Impertinence....