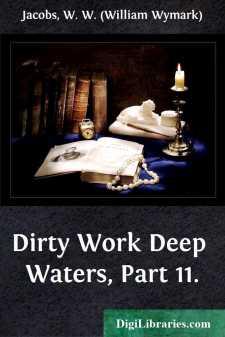 It was nearly high-water, and the night-watchman, who had stepped aboard a lighter lying alongside the wharf to smoke a pipe, sat with half-closed eyes enjoying the summer evening. The bustle of the day was over, the wharves were deserted, and hardly a craft moved on the river. Perfumed clouds of shag, hovering for a time over the lighter, floated lazily towards the Surrey shore.

"There's one thing about my job," said the night-watchman, slowly, "it's done all alone by yourself. There's no foreman a-hollering at you and offering you a penny for your thoughts, and no mates to run into you from behind with a loaded truck and then ask you why you didn't look where you're going to. From six o'clock in the evening to six o'clock next morning I'm my own master."

He rammed down the tobacco with an experienced forefinger and puffed contentedly.

People like you 'ud find it lonely (he continued, after a pause); I did at fust. I used to let people come and sit 'ere with me of an evening talking, but I got tired of it arter a time, and when one chap fell overboard while 'e was showing me 'ow he put his wife's mother in 'er place, I gave it up altogether. There was three foot o' mud in the dock at the time, and arter I 'ad got 'im out, he fainted in my arms.

Arter that I kept myself to myself. Say wot you like, a man's best friend is 'imself. There's nobody else'll do as much for 'im, or let 'im off easier when he makes a mistake. If I felt a bit lonely I used to open the wicket in the gate and sit there watching the road, and p'r'aps pass a word or two with the policeman. Then something 'appened one night that made me take quite a dislike to it for a time.

I was sitting there with my feet outside, smoking a quiet pipe, when I 'eard a bit of a noise in the distance. Then I 'eard people running and shouts of "Stop, thief!" A man came along round the corner full pelt, and, just as I got up, dashed through the wicket and ran on to the wharf. I was arter 'im like a shot and got up to 'im just in time to see him throw something into the dock. And at the same moment I 'eard the other people run past the gate.

"Nothing," he ses, breathing 'ard and struggling. "Let me go."

He was a little wisp of a man, and I shook 'im like a dog shakes a rat. I remembered my own pocket being picked, and I nearly shook the breath out of 'im.

"And now I'm going to give you in charge," I ses, pushing 'im along towards the gate.

"Wot for?" he ses, purtending to be surprised.

"More use to search the dock," I ses. "I see you throw it in. Now you keep quiet, else you'll get 'urt. If you get five years I shall be all the more pleased."

I don't know 'ow he did it, but 'e did. He seemed to sink away between my legs, and afore I knew wot was 'appening, I was standing upside down with all the blood rushing to my 'ead. As I rolled over he bolted through the wicket, and was off like a flash of lightning....