Diderot and the Encyclop?dists Volume II. 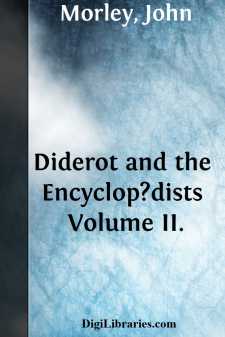 We may now pass to performances that are nearer to the accepted surface of things. A short but charming example of Diderot’s taste for putting questions of morals in an interesting way, is found in the Conversation of a Father with his Children (published in 1773). This little dialogue is perfect in the simple realism of its form. Its subject is the peril of setting one’s own judgment of some special set of circumstances above the law of the land. Diderot’s venerable and well-loved father is sitting in his arm-chair before the fire. He begins the discussion by telling his two sons and his daughter, who are tending him with pious care, how very near he had once been to destroying their inheritance. An old priest had died leaving a considerable fortune. There was believed to be no will, and the next of kin were a number of poor people whom the inheritance would have rescued from indigence for the rest of their days. They appointed the elder Diderot to guard their interests and divide the property. He finds at the bottom of a disused box of ancient letters, receipts, and other waste-paper, a will made long years ago, and bequeathing all the fortune to a very rich bookseller in Paris. There was every reason to suppose that the old priest had forgotten the existence of the will, and it involved a revolting injustice. Would not Diderot be fulfilling the dead man’s real wishes by throwing the unwelcome document into the flames?

At this point in the dialogue the doctor enters the room and interrupts the tale. It appears that he is fresh from the bedside of a criminal who is destined to the gallows. Diderot the younger reproaches him for labouring to keep in the world an offender whom it were best to send out of it with all despatch. The duty of the physician is to say to so execrable a patient—“I will not busy myself in restoring to life a creature whom it is enjoined upon me by natural equity, the good of society, the well-being of my fellow-creatures, to give up. Die, and let it never be said that through my skill there exists a monster the more on earth!” The doctor parries these energetic declamations with sufficient skill. “My business is to cure, not to judge; I shall cure him, because that is my trade; then the judge will have him hung, because that is his trade.” This episodic discussion ended, the story of the will is resumed. The father, when on the point of destroying it, was seized with a scruple of conscience, and hastened to a curé well versed in casuistry. As in England the agents of the law itself not seldom play the part of arbitrary benevolence, which the old Diderot would fain have played against the law, the scene may perhaps be worth transcribing:

“‘Nothing is more praiseworthy, sir, than the sentiment of compassion that touches you for these unfortunate people. Suppress the testament and succour them—good; but on condition of restoring to the rightful legatee the exact sum of which you deprive him, neither more nor less. Who authorised you to give a sanction to documents, or to take it away? Who authorised you to interpret the intentions of the dead?’

‘But then, father Bouin, the old box?’

‘Who authorised you to decide whether the will was thrown away on purpose, or mislaid by accident? Has it never happened to you to do such a thing, and to find at the bottom of a chest some valuable paper that you had tossed there inadvertently?’

‘But, father Bouin, the far-off date of the paper, and its injustice?’

‘Who authorised you to pronounce on the justice or injustice of the document, and to regard the bequest as an unlawful gift, rather than as a restitution or any other lawful act which you may choose to imagine?’

‘But, these poor kinsfolk here on the spot, and that mere collateral, distant and wealthy?’

‘Who authorised you to weigh in your balance what the dead man owed to his distant relations, whom you don’t know?’

‘But, father Bouin, that pile of letters from the legatee, which the departed never even took the trouble to open?’

‘There is neither old box, nor date, nor letters, nor father Bouin, nor if, nor but, in the case....