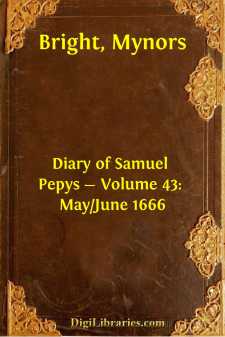 May 1st. Up, and all the morning at the office. At noon, my cozen Thomas Pepys did come to me, to consult about the business of his being a justice of the Peace, which he is much against; and among other reasons, tells me, as a confidant, that he is not free to exercise punishment according to the Act against Quakers and other people, for religion. Nor do he understand Latin, and so is not capable of the place as formerly, now all warrants do run in Latin. Nor is he in Kent, though he be of Deptford parish, his house standing in Surry. However, I did bring him to incline towards it, if he be pressed to take it. I do think it may be some repute to me to have my kinsman in Commission there, specially if he behave himself to content in the country. He gone and my wife gone abroad, I out also to and fro, to see and be seen, among others to find out in Thames Streete where Betty Howlett is come to live, being married to Mrs. Michell's son; which I did about the Old Swan, but did not think fit to go thither or see them. Thence by water to Redriffe, reading a new French book my Lord Bruncker did give me to-day, "L'Histoire Amoureuse des Gaules,"

[This book, which has frequently been reprinted, was written by Roger de Rabutin, Comte de Bussy, for the amusement of his mistress, Madame de Montglas, and consists of sketches of the chief ladies of the court, in which he libelled friends and foes alike. These circulated in manuscript, and were printed at Liege in 1665. Louis XIV. was so much annoyed with the book that he sent the author to the Bastille for over a year.]

being a pretty libel against the amours of the Court of France. I walked up and down Deptford yarde, where I had not been since I come from living at Greenwich, which is some months. There I met with Mr. Castle, and was forced against my will to have his company back with me. So we walked and drank at Halfway house and so to his house, where I drank a cupp of syder, and so home, where I find Mr. Norbury newly come to town to see us. After he gone my wife tells me the ill newes that our Susan is sicke and gone to bed, with great pain in her head and back, which troubles us all. However we to bed expecting what to-morrow would produce. She hath we conceive wrought a little too much, having neither maid nor girle to help her.

2nd. Up and find the girle better, which we are glad of, and with Sir W. Batten to White Hall by coach. There attended the Duke as usual. Thence with Captain Cocke, whom I met there, to London, to my office, to consult about serving him in getting him some money, he being already tired of his slavery to my Lord Bruncker, and the charge it costs him, and gets no manner of courtesy from him for it. He gone I home to dinner, find the girle yet better, so no fear of being forced to send her out of doors as we intended. After dinner. I by water to White Hall to a Committee for Tangier upon Mr. Yeabsly's business, which I got referred to a Committee to examine. Thence among other stops went to my ruler's house, and there staid a great while with Nan idling away the afternoon with pleasure....